It's a cool movie homage, but they get the details so wrong! 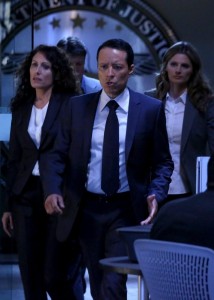 If you  have ever watched a TV show or movie that dealt with a topic you know particularly well, and groaned repeatedly when the writers messed up details that if they’d only bothered to do a modicum of research wouldn’t have been messed up, then you’ll understand how I reacted to the “Dreamworld” episode of CASTLE.

You see, some years ago, I co-wrote a book on poisons for mystery writers (Howdunit: Book of Poisons, Writers Digest Press).  I did a lot of research and I understand a.) how toxins generally act in a human body and b.) how poisoning is treated. So, as I pointed out last week, I groaned when Beckett (Stana Katic) told Castle (Nathan Fillion) he’d been exposed to the deadly stolen toxin and only had 24 hours to live.

Can you say DOA, the 1950 film noir starring Edmund O’Brien who wants to find out who poisoned him before he dies? Gotta love the concept of homage, but geez, guys, if you’re going to do something like that, at least try to get the basics right.

We start with Castle telling Beckett about Valkyrie and Dreamworld, and Beckett telling McCord (Lisa Edelstein). But nobody really knows what either is, except for a rumored base.

Then the doctor is explaining to Castle that they’re going to treat the poison with a shot which will help keep him alive for a few more hours. The reason the guy from the previous episode died so quickly is that he’d been exposed far longer. Alas, no one explains how the shot is going to keep Castle alive for a little bit, but won’t eventually save him. Nor how the poison doesn’t cause symptoms at first, but then causes weakness and death. Which doesn’t make sense.

So Beckett and McCord dig up reporter Brad Parker (Warren Christie) that had his story on Dreamworld killed by the Secretary of Defense Reed (Glenn Morshower). They try to get the reporter to tell him everything he knows about the ultra-top-secret base, but he doesn’t know much. So they go after Reed.

But Reed isn’t exactly talking, although he does “off the books.” In short, he knew about Dreamworld and the bombing of an Al Quaeda base that Bronson (the dead guy from last week) was involved in a year before. But Al Quaeda hasn’t done anything about it – unless stealing the poison was part of it.

The poison is supposedly pretty nasty stuff – it’s inhaled, for one thing. But what if the bad guys want to disperse it with a bomb, creating a toxic plume over the city? Stop. That’s impossible. You’d need way too much to create that kind of a toxic plume – like a whole factory’s worth. And anything that potent would probably kill the people deploying it. That’s the problem with ricin – last two attempts to use it have killed the people using it.

Castle gets the phone call from his mom and daughter. Martha (Susan Sullivan) and Alexis (Molly Quinn) don’t really buy that everything’s all right, but you can sort of understand why Castle doesn’t want to say anything. He’s still being an idiot.

So they find a second cousin of the Al Quada target in the bombing, but the cousin wanted nothing to do with the guy. Nonetheless, Bronson had followed him. Turned out Bronson and the reporter were in love with a servant in the household that got bombed.

Beckett and McCord get the transcript from the air strike, but it’s so heavily blanked out (aka redacted), they can’t make anything out of it. But with Castle’s help, they do and the tech guy do some decoding and figure out that maybe Valkyrie is a part of the report. Now, all they have to find is the original recordings from the jets.

In the meantime, Martha is trying to figure out what’s going on, and goes to visit Esposito (Jon Huertas) and Ryan (Seamus Deaver), not that they’re any help.

At long last, we’re starting to see some symptoms in Castle – he’s having trouble breathing. So why isn’t he on oxygen? Oh, wait – they’ll find a way to save Castle. Apparently, there’s an antidote. Argh. There are a few anti-venoms and an antidote for cyanide poisoning, but by and large, most poisonings are treated by fixing the symptoms where possible.

So with Castle starting to get sick and a possible deadly toxin about to be deployed, Beckett goes after Reed again. Supposedly a stupid move, but gee, it forced him to show his hand. She’s so clever. Turns out the servant that Parker was in love with was Valkyrie and the air strike went ahead even though Reed knew Valkyrie hadn’t gotten out of the house.

Castle gets a little peeved about his situation, complaining that he’s filled with a poison that can’t be detected unless someone is looking for it. Stop. All poisons are not detectable unless someone is looking for it. The best a coroner’s lab tech can do is guess what the potential toxinwas by the physical autopsy results and medical records, then test to see if the substance is there in the blood or liver. That includes alcohol and street drugs, by the way. Head plant ended for the moment.

So they have figured out the bad guy is Parker and where they think he’s going to hit next, namely Reed. Castle and Beckett take off together because Parker presumably has the antidote (why would he have it?) and Castle wants to be close to the antidote. Only Beckett and Castle theorize that maybe Parker is really going after Reed’s wife in a kind of eye for an eye kind of thing.

They get to Reed’s house just in time to save both the wife and Castle. He wakes up in the hospital bed, surrounded by Martha, Alexis and Beckett. Nice touching moment. But Beckett’s in kind of an awkward position at work. She’d like to bust Reed for letting Valkyrie get killed, but she can’t. Ah well. Everything’s going to be okay, even if she and Castle have a few more kinks to work through.

Like I noted above, this was obviously an homage to DOA, right down to the unnamed toxin. Nor was DOA that probable, anyway. Still. You’d think just a teeny bit of research, just a little bit?