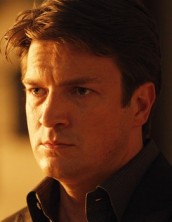 It's the usual kind of case to solve, but the real mystery is how Castle and Beckett are going to fall out.

I simply do not understand why the producers of CASTLE seem to feel the need to jerk their viewers around with this constant will they/won’t they game between Castle (Nathan Filion) and Beckett (Stana Katic). They spent four season playing with getting the two together – not only taking a miserably long time, but doing it in the most excrutiating way. Then they spent a good chunk of last season bouncing between happy love and almost breaking up, winding up with “Watershed,” in which not only do we spend an awful lot of time watching the two act like idiots, but we’re left on tenterhooks at the end.

Oh, yeah, the murder – it’s pretty basic. Young woman found dead (in a watertank this time), was living in a dive hotel pretending to be a hooker. And whodunit is no real surprise.

But more to the point, Beckett gets called down to Washington, DC, where she interviews for a job with a Federal task force. Of course, that would mean moving to DC and leaving Castle behind. Which is why she doesn’t tell him about it. Dumb move. In the meantime, Castle and Alexis (Molly Quinn) are sparring a little. Alexis wants to go to Costa Rica and daddy is having a little trouble letting go – that whole experience when Alexis got kidnapped earlier this season. Alexis admits she’s a little scared, too, but she doesn’t want to let fear win. Which will factor into Castle’s relationship with Beckett.

So after Castle gets called to the case, Esposito (Jon Huertas) starts challenging Castle about his relationship with Beckett, especially since Espo knows she was gone that morning, if not where. Espo also jabs Castle re the names of his characters in his books – “Would it kill you to name someone Gonzalez?” Love how the writers poked a little bit of fun at that.

So the girl in the tank is a Harvard computer science student, Erika Albrook. Her parents thought she was backpacking in Europe. But a security video from the building’s elevator shows her running up and downstairs and then up to the roof and looking cautiously out. Oh, and we find out that she wasn’t a hooker because her creepy neighbor peeked into her apartment and saw her working on a laptop while a CD of sexy sounds played.

So the vic’s friend saw her dressed strangely and arguing with someone else, who tells her, “you have no idea what you’re up against.” In the meantime, Beckett is trying to look at all the IP addresses the vic looked up and Lt. Gates (Penny Johnson Jerold) breaks in to ask about the call she got from the FBI. Gates reminds Beckett that she’s on the short list for an amazing opportunity career-wise.

As Lanie (Tamala Jones) is telling Beckett about the creosote under the stiff’s fingernails, Beckett tells her about the job interview and confesses she doesn’t know what kind of relationship she actually has with Castle. Lanie points out that maybe it’s time she and Castle actually talked to each other about their relationship and figured things out.

So they find the strange guy the vic was talking to – and he was dead before she was. Turns out he was fired from the high end law firm that she was hacking. It seems her best friend was working as an intern at the same firm and was supposedly killed in a car accident while driving drunk. Except that seriously was not the friend’s style. Castle says it smells like a John Grisham novel. We say it smells like a cover up.

So Espo figures out about the job interview, Beckett leaves and Ryan (Seamus Deaver) comes in wondering what’s going on. He asks Espo if Beckett is pregnant, which is kind of on his mind since he and his wife are now officially expecting. Awwwww.

Except here is where the episode gets really cranky. Castle finds Beckett’s boarding pass from the flight to DC, is very (understandably) angry that she not only didn’t tell him about the interview, but also lied to him about it. And Beckett pretty much blows it. The next morning, she’s really grumpy and Castle isn’t around, so everyone knows they had a fight.

Castle complains to Martha (Susan Sullivan), who gives him some unusually sage advice after pointing out that he’s expecting her to put him first without knowing where the relationship is going. And being afraid and running away isn’t going to help in this case. Beckett for her part is talking with her dad, because she knows she has the job now, and feels she has to choose between the job and Castle, and she’s not even sure what she has there. Dad doesn’t make the choice any easier by pointing out that when she gets into a tough spot relationship-wise, she hides in her work and that may not be her best option.

In the meantime, the team is closing in. There’s a politician represented by the firm who was last scene with the now-dead intern. He’s alibi’d, but he has this bad boy brother. Guess whodunit?

But who cares about that. Castle and Beckett meet up. Both are confused, but they both agree that they deserve more from each other. So Castle goes and proposes, which is not what I expected and decidedly cool, but Beckett still hasn’t told him about the job and of course that’s when we fade to black, not to know the answer until the season starts next fall.

I swear, if those two get broken up, I will be peeved. Seriously peeved. I don’t think that’s what’s going to happen – it will make the show pretty difficult. But I don’t trust these producers. I really don’t.