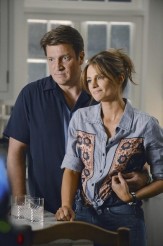 Ryan beomes the Wild Rover in a top-notch episode

“The Wild Rover” starts out as your standard CASTLE episode, with light-hearted banter between Castle (Nathan Fillion) and Beckett (Stana Katic), a weirdly positioned stiff and the usual odd clues. But it quickly turns into something really extraordinary – namely CASTLE at it’s best.

The victim is a cupcake baker found shot to death in a mixing bowl of his batter. But, lo, there’s a magic briefcase filled with $50,000 in cash that Jimmy would take out to Staten Island twice a week. Seems Jimmy had a few secrets.

So does Castle. Apparently, he’s been talking about Jordan in his sleep, of late, and Beckett is curious. You’d think he’d just ‘fess up, but because he swears it’s nothing, Beckett isn’t buying it.

Jimmy’s secrets come to light pretty quickly – the bakery is clearly a money-laundering operation for the Irish Mob crew runny by Bobby Shannon (Michael Rodrick). Jimmy’s been getting several calls from Siobhan O’Doul (Cara Buono). It’s pronounced She-vawn, and yes, they make the standard joke about Celtic spelling, but if you know anything about the language, it does make sense. It’s just a different language, is all, just like vowels and some consonants are pronounced differently in Spanish or French.

So they bring Siobhan in, but the timing couldn’t be worse. Ryan (Seamus Dever) and his wife Jennifer (played by his real-life wife Juliane Dever) have just come back from the station after their appointment with the fertility specialist. Siobhan runs ups to Ryan, calling him Fenton, and lays a big kiss on him right in front of Jennifer.

Well, it turns out Ryan, seven years before, did some deep undercover work on the Irish Mob, getting out just before the Feds got some of them. But as the new Fed shows up and confirms, they weren’t able to get the crew’s Bible, the paper record of the operation that Shannon has. without that, there’s no evidence against Shannon. Problem is, Siobhan rather fell for Ryan’s alter ego.

It also turns out that Ryan decides he needs to go back under cover to get the Bible or the Feds won’t protect Siobhan, which is pretty cold, since Siobhan’s contact is Jimmy the now-dead baker.

So while Ryan’s getting all decked up to go back to the Irish Mob, Beckett and the rest of the crew is working on Jimmy’s murder. The problem is, Shannon is the top suspect – what looked like his rare car was seen outside the bakery just before the murder. But according to Shannon’s EZ-Pass transponder, Shannon was in Yonkers at the horse race track, and track security confirms it with a photo of him right around the time of the murder.

Ryan meets up with Shannon in Siobhan’s bar and convinces him he’s the prodigal son, just like in the tune “The Wild Rover.” But one of Shannon’s associates, Liam Finch (Brian Letscher) isn’t convinced and decides he’s going to check out “Fenton O’Connell.” Liam’s wife Maggie (Christina Cox) is even less convinced.

Ryan, as Fenton, visits his former girlfriend Siobhan at her place and drops the cover long enough to explain that he did care for her. Fenton/Ryan is set up to join the weekly pool game, which will give him access to Shannon’s safe, where the Bible is. Siobhan knows the combination, which is changed weekly, but is based on the take from the bar every Thursday night – a pretty clever trick, when you think about it.

The problem is, someone is setting up Shannon to take the fall for Jimmy’s murder and there’s no way to get a hold of Ryan. It sure looks like it might be Liam. During the pool game, Liam gets a call that there’s a rat in the house. Still, Ryan manages to sneak away from the game long enough to get into the safe and get the Bible. Just barely long enough. I loved that Shannon spotted the money out of place, but just grabbed his gun and took off. Time to confront Fenton later, never mind that he was hiding in the office.

So Liam takes Ryan for a ride, and it’s not like Ryan doesn’t know what this is about. At the station, Jenny is freaking out, and Beckett is trying to console her, but something comes up…

At the docks, Shannon shows with Siobhan in tow. She’s the rat, but Shannon asks Ryan to prove his loyalty by blowing her brains out. But Ryan can’t.

Now, I gotta love how this next part works out, but at the same time, I wince slightly on plausibility grounds. Apparently, Ryan snagged Liam’s phone, called the station and left the line open so everyone could hear where they were and what was going on. So Beckett and the crew are there waiting for them. Ryan hands the Feds the Bible, and it turns out Liam is not the killer. It was Maggie who was trying to get Shannon out of the way so her husband could advance in the organization.

As for Jordan, turns out it was a car company that Castle had to do a report on back when he was in high school. Only he bought the paper and has felt a little bit like a fraud every since, no matter how hard he was worked to be a great writer. And it’s a really neat moment, because Beckett sees where he’s coming from and it makes her like him even more.

Oh, and Jennifer is still fussed at Ryan for going undercover, but there’s a good reason why. It’s scary and, well, she’s already pregnant. Yay! So Ryan is thrilled and agrees – he’ll not be The Wild Rover, nae, never no more.