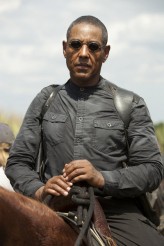 Exclusive Interview: REVOLUTION star Giancarlo Esposito on the second half of Season 1 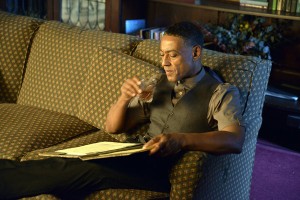 On NBC’s Eric Kripke-created/Kripke and J.J. Abrams-produced REVOLUTION, the world has been without electricity for fifteen years now, which has wrought dramatic changes in the social structure. Ambitious conqueror Sebastian Monroe (David Lyons) has founded the Monroe Republic. In the episode before the midseason break,Monroe had acquired helicopter gunships, and the ability to get them in the air, which could spell bad news for the show’s band of heroes.

Giancarlo Esposito plays Captain Tom Neville, one of Monroe’s top officers who has his own ambitions and is harboring growing doubts about his leader. However, Tom does have a very warm relationship with his wife Julia, played by Kim Raver. Esposito talks to the press at a Television Critics Association Q&A session, and afterward takes some time for an exclusive follow-up chat, in preparation for REVOLUTION’s midseason return, Monday March 25 at 10 PM.

Esposito tells reporters the show has had a surprising effect on life. “For me, this show has really influenced my life in terms of, I recently went out of the country, and I had no cell service for five days, and it was illuminating not to have that, not to have that touch of the phone or to have that comfort in my hand. After two days, I realized that I didn’t need to have that. I could rely on human and personal interaction.”

REVOLUTION has even had an impact on how Esposito interacts with his children, he adds. “After spending time with my children, four girls from sixteen to nine, over the Christmas break, we decided not to do anything for Christmas. We walked. We talked. We sat. We looked at each other. We put down our technology. That came directly from the inspiration of what this show has done in my life. So it’s to be present. Sometimes it takes a little effort, because we’re busy doing many things while we’re trying to do one thing. So I find that, for me, the inspiration is in the show not only to be entertaining and to teach us something not only about this world, but also about ourselves. And so my time with my family was inspired by the time in the show where I see that it’s really about family coming together, moving apart, understanding each other, discussing, talking, and figuring out how we’re able to renew ourselves, and our thirst for this connection once again.”

Later, Esposito talks more about his evolution with REVOLUTION.

ASSIGNMENT X: What surprised you about where REVOLUTION has gone?

AX: A lot of viewers know you from your role as the deeply intimidating Gus Fring on BREAKING BAD. How is it playing scenes in REVOLUTION where your character Tom is being intimidated by David Lyons as Monroe?

AX: Is Monroe’s use of helicopter gunships possibly a tipping point for Tom?

AX: I don’t know what the superstition is – if it’s safe to say “the Scottish play” here?

ESPOSITO: You can’t say it in a theatre.

AX: But there’s a stage in this hotel ballroom.

AX: Okay. Kim Raver, who plays your wife, has described Tom and Julia’s relationship as a sort of Lord and Lady Macbeth situation.

ESPOSITO: No, I don’t. I feel like we’re an even match, although she is my wife and the power goes to the woman, always. She’s also my inspiration, she’s also my love. So therefore, I’m in deference to her.

AX: What would you most like people to know about REVOLUTION right now?

ESPOSITO: That the world is expanding. That now we’ll get into the revolution, and you’ll also see all the other worlds. People are saying, this is one little small part of the world. Now you’ll actually see the epic scope of what is possible within this show.

Article Source:Assignment X
Article: Exclusive Interview with Giancarlo Esposito on the second half of REVOLUTION – Season 1