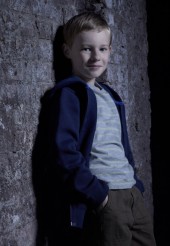 The young actor talks about playing the son of a killer 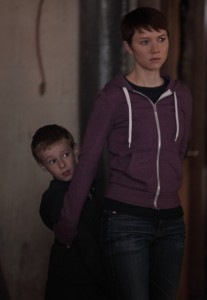 On THE FOLLOWING, on Fox Monday nights at 9 PM, escaped serial killer and cult leader Joe Carroll (James Purefoy) takes pleasure in terrorizing, manipulating, destroying and otherwise playing with others, especially FBI consultant Ryan Hardy (Kevin Bacon). However, there is one person Joe desperately wants to believe the best of him – his eight-year-old son Joey, played by Kyle Catlett.

Kyle, who is actually ten years old, seems very self-possessed, as well as empathetic to real-life kids coping with dangerous home situations, as he talks about playing one of the few unambiguously good characters on THE FOLLOWING.

CATLETT: Yes. Because I saw a bunch of stories that I wanted to be in and I just wanted to work my way into the stories. I like stories.

AX: Did you take any acting lessons, or did you just start auditioning?

AX: Is THE FOLLOWING your first series?

KYLE CATLETT: No. I was in MERCY, AS THE WORLD TURNS and also I’m going to be in a movie that premieres October 13, 2013, called THE YOUNG AND PRODIGIOUS SPIVET. I’m playing T.S. Spivet, the main character of the film.

AX: Do you have a preference for doing TV or movies?

KYLE: Brad Pitt, Angelina Jolie – James Purefoy and Kevin Bacon, I want to be like them.

AX: What were you told about Joey Carroll before you got the role?

AX: How do you think your character feels about his dad?

KYLE: Probably really scared, and also maybe a teensy bit interested, but mostly, I think he’s just scared and doesn’t know if he should talk to him or not, if he’s going to do something to him or not. He doesn’t really know.

AX: What would you most like people to know about Joey Carroll?

KYLE: That [he’s] a boy trapped between good and evil, and it’s like so many boys out there are actually trapped between good and evil – they don’t whether to be happy, scared – they don’t know what to feel. They have no idea who to trust, they don’t trust anybody and they don’t know what to do. Sometimes they run away and end up getting beaten up. They just are really scared and want to get out of this [situation]. And it’s really sad that so many kids have to go through that, and I can imagine how they feel.