Exclusive Interview: Valorie Curry makes a killing on THE FOLLOWING

The actress talks playing a killer, plus TWILIGHT: BREAKING DAWN 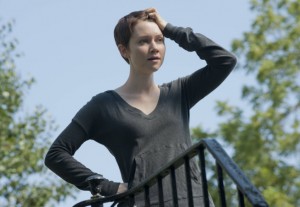 On Fox’s new Kevin Williamson-created series THE FOLLOWING, Mondays at 9 PM, Kevin Bacon’s character, once and re-deputized FBI agent Ryan Harding is trying to stop serial killer Joe Carroll (James Purefoy) from striking again. The big problem here is that, while Joe is locked up, he’s got a surprising number of innocuous-seeming people walking free who are eager to do his murderous bidding.

Chief among these followers is sweet-faced Emma Hill, played by Valorie Curry. Emma went so far as to spend years as the nanny for Joe’s young son, just so that she could snatch the child at the right time from Joe’s unsuspecting ex-wife (Natalie Zea).

In person, Cal State Fullerton grad Curry – who VERONICA MARS fans will recognize for her arc on that series as Jane Kuhne – sounds very enthusiastic as she discusses THE FOLLOWING, Emma and her other recent high-profile gig.

ASSIGNMENT X: When you got the script for THE FOLLOWING, what was your first impression?

VALORIE CURRY: When I was reading it, I was very confused, because I knew the part that I was [auditioning for] – “Where is this girl? I don’t see her. Where is she?” And then when I got to the end, I was thrilled. I loved the twist, I love horror and I really enjoy playing a character that surprises people, that undermines our expectations.

AX: Did you do any kind of research and/or physical training for the role?

CURRY: Not physical training, no. In terms of research, the only sort of serial killer or cult research that I found useful was [Charles Manson follower] Squeaky Fromme. She’s been a big influence for me [in playing Emma]. I found this really wonderful interview that was done in the early Eighties with her, and what was so obvious was, when they asked her about Manson, this light erupts from her face, this joy, this utter adoration that she has for him, and from the outside perspective, that’s scary, but for her, it’s such true love and real love, and that was something that I incorporated into Emma, and that’s been the motivation for everything that she does. She’s not a bloodthirsty killer. She wouldn’t necessarily be a killer left to her own devices, but she will do anything for Joe, and she’s very practical. But in terms of research for me, I was working to immerse myself in literature that she would immerse herself in. She’s a bookworm, so in Episode Two, the day I kill my mother, I kept rereading a speech of Lady Macbeth’s. She’s asking for the spirits to come and “unsex me here and take my milk for gall,” just praying for the courage to do that. I read Emily Dickinson, obviously [Edgar Allan] Poe, my dad used to read me that before I went to bed at night, which my mother hated. So the literature that would have affected her is what I researched.

AX: Do you know why it is that Emma’s so in love with Joe Carroll?

CURRY: I think he caught her in a moment that is so formative for everyone – she’s fifteen years old. Everything we feel at that time is so heightened, is so intense, is so magnified. And she was essentially an abuse victim from her mother, and he steps in and forms her and gives her ground and gives her focus, so he becomes not only lover but father and god. He raises her to be the perfect woman for him, or the perfect disciple. And so that’s what she lives for.

AX: How hard or easy is it playing a fifteen-year-old in the flashbacks?

CURRY: I try not to think about that too much – you can’t play “young,” you can only play the moment. What I think lent the authenticity to it was the hair and the makeup and that was very shocking to see. And to see the episode later, after it was done – I looked like a child, which was even more disturbing when you see what she has to do. I looked like I did ten years ago, and they based the look on pictures that I brought in of myself younger. So that helped, but in terms of playing young, I couldn’t really play young, I could only play the vulnerability of her youth.

AX: How is it playing opposite James Purefoy?

CURRY: It’s a dream. I was already a fan – I loved ROME – it’s like he said about Kevin Bacon. When you act with such a talented, skilled actor, it makes you better. I feel better when I’m with him, but his concentration, his focus, just immediately draws me into the moment and gives me everything that I need in terms of the character.

AX: Has there been anything on THE FOLLOWING that’s grossed you out?

CURRY: There have been some moments seeing visceral prosthetics or whatnot in the makeup trailer [laughs] that have grossed me out. Our makeup department is so incredible and so wonderful that it’s very realistic, pretty disgusting. But the violence for the most part hasn’t shocked me. I mean, I’m obviously very separated from it as a person.

AX: Have you had to do any fight training for the role?

CURRY: Not fight training. Emma isn’t a physical powerhouse. She uses her mind and she uses manipulation to get what she wants. I think if she had to rely on muscle, she wouldn’t have survived this long.

CURRY: Well, I was just in the final installment of TWILIGHT, BREAKING DAWN: PART 2. I play Charlotte, I’m the American nomad vampire, and since August, I’ve had my hands full here [with THE FOLLOWING].

AX: What would you most like people to know about THE FOLLOWING right now?

CURRY: I think it was alluded to that it’s really a love story [laughs] between Ryan Harding and Joe Carroll and there are some brilliant characters that Kevin Williamson brought to life. I think people will catch themselves empathizing with monsters and hopefully they can enjoy that and never get comfortable – never get too attached to anybody.