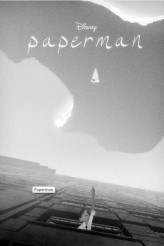 The filmmakers talk about their Oscar-nominated Disney animated short film

Walt Disney Animation Studios’ WRECK-IT RALPH has been nominated for an Oscar for Outstanding Animated Feature. PAPERMAN, the Walt Disney Animation Studios short that precedes RALPH in theatres and will accompany it on home video – it can also be viewed solo at present on Disney’s YouTube channel – has likewise received an Oscar nomination for Outstanding Animated Short.

PAPERMAN director John Kahrs and producer Kristina Reed stop on their way to a joint screening of their film and RALPH to talk about how their short came together.

ASSIGNMENT X: How long have you been working on PAPERMAN?

KAHRS: We worked on it for about a year. That’s the short answer.

AX: To go with the short film?

REED: For about a year, off and on.

AX: Were you told at that time that Disney was looking for something to go with WRECK-IT RALPH, or did you have any kind of a mandate at all?

KAHRS: I was told, “Don’t worry about that whole thing. Just focus on it, make it right, and whatever happens, happens.” Actually, I feel very lucky and honored that they chose to put [this] short in front of WRECK-IT RALPH. We’re honored by that.

REED: The announcement that we were going to be in front of WRECK-IT RALPH came just as we were finishing the last of the post, and it was so exciting, because we knew that RALPH would take us to thirty countries, and people would see our film in 2D and in 3D, and it was just a great blessing.

KAHRS: It kind of lives in the space between. It’s a hybrid of both 2D and 3D technology, of hand-drawn and CG.

AX: And is it the sort of thing that might get turned into a feature?

KAHRS: I can’t really tell what would happen to it. We’re working on something after it now that’s kind of a follow-up project, but I can’t really say much more than that.

REED: The technique is potentially something that would become a feature.