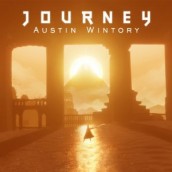 As innovatively great as videogame scores have proven to be, they’re often anything but relaxing. But then, the musical Zen equivalent of a Japanese water garden isn’t exactly apropos to accompany the slaughter of first person combat or raging fantasy battles that are the stuff of the major game studios. So it’s no wonder that the relaxingly adventurous score of JOURNEY and its flowing robe figure was originated by the indie Thatgamecompany, who’ve given composer Austin Wintory the opportunity to compose a soundtrack that’s taken the genre to a new level of melodic poetry, not to mention acclaim by a mass audience not used to such beatific pursuits as reaching a holy mountain.

A prolifically rising composer who made equally strong impressions between the humanistic Arabic tones of CAPTAIN ABU RAED and the eardrum eviscerating horror of GRACE, JOURNEY just might be Wintory’s most transcendent achievement amidst other game score of his for HORN and KINECT PARTY (with LEISURE SUIT LARRY to follow). Taking place in a mystical sand-covered world where the journey is the destination, Wintory’s music is as much about stillness as the flowing-robed movement of its stick-figure voyager. The silken wealth of a lush, string-driven orchestra mixes with a melange of exotically tuned wind instruments, electronics and voice, fusing neo-Oriental, Arabic and Medieval sensibilities into a hypnotic world music sound. The tonal equivalent of Haiku in a game where musical notes serve as communication, JOURNEY speaks softly with a continuous sense of wonder and discovery that’s nicely reminiscent of such mystical travelogue movies as BARAKA, all while avoiding the sand pits of new-age massage room music. While there are wisps of darkness to give the game a necessary sense of dramatic conflict and challenge, it’s a sense of gossamer joy that fills Wintory’s work, creating a sound that dazzles with the musical possibilities that the genre offers beyond body counts.

With this kind of evocative, appealing sound, it’s no wonder that JOURNEY is essentially the first videogame score to get a Grammy nomination, bringing a level of pop respectability to an arena most often wrongfully regarded as kid’s stuff. But whether you own a system or not, JOURNEY plays equally well as a tranquilly evocative musical adventure in its own right, the kind of soundtrack capable of conjuring blissfully exotic quests of the imagination without the need for a controller.

Clink on the link to buy the JOURNEY soundtrack