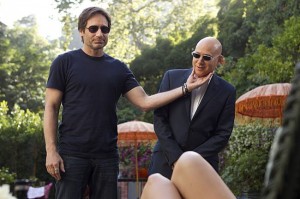 On CALIFORNICATION, the half-hour black comedy created by Tom Kapinos, now in its sixth season on Showtime Sundays at 10:30 PM, David Duchovny’s character Hank Moody may be messed up, but he’s often an island of sanity compared to his agent Charlie Runkle, played by Evan Handler.

New Yorker Handler memorably played Harry Goldenblatt in eighteen episodes of HBO’s SEX AND THE CITY, but he’s also well known for TIME ON FIRE, the one-man show he wrote and starred in, based on his memoir about surviving cancer treatment. Handler wrote a follow-up volume, IT’S ONLY TEMPORARY, which has just been released as an e-book, along with its predecessor.

Following a group press session for CALIFORNICATION, Handler talks about his current gig, as well as his adventures in the publishing trade.

ASSIGNMENT X: Your character on SEX AND THE CITY was so distinctive, do you think having done that made it harder or easier for you to be cast after that?

EVAN HANDLER: I think even people in show business are affected by celebrity, so if you’ve got a shine on you from a previous show, I think they like going home and telling their wife or girlfriend or boyfriend that they’re considering you for a part. At the same time, I wouldn’t know this, but I wouldn’t doubt if my familiarity from SEX AND THE CITY has led people to skip me over for other things, but that’s stuff that’s outside of my sight and hearing.

AX: How did you become involved in CALIFORNICATION?

HANDLER: [I] wound up reading for CALIFORNICATION, which turned into a test with Bob Greenblatt, the head of Showtime at the time, and Tom Kapinos and David [Duchovny], and I remember being in the waiting room with a group of other actors, and they had work sessions now for casting these things. Work sessions – before you actually do your auditions for the network executives, you go with the show creator and possibly the costar to read together and rehearse, so they can sort of direct you. I hate that personally, because I want my audition to be my audition, but [at the CALIFORNICATION session], David didn’t have pages in front of him. He said half of what was on my page and half things that weren’t on my page. So I just went with it and ad-libbed what seemed to go along with it. And it seemed to really fly in the room and they hired me and that was that. And after doing the pilot, we said to each other, “Well, that was fun, but I’m not sure where you go from here” – we’ve sort of said that to each other each season since.

AX: Is the ad-libbing something that’s still part of the show, or was that just for the audition?

HANDLER: I always hesitate to emphasize it too much, because Tom writes the scripts and we do what Tom wrote. It’s not like we improvise our scenes or anything like that. But Tom is a guy who’s incredibly secure and also really happy and comfortable with the people that he’s hired in all departments, so while he knows exactly what he wants and what he likes and what he doesn’t like, he’s happy for you to try anything, any time. I’ll go to him a lot of times and say, “What if I did this here?” and he’ll say, “Don’t ask me, just do it.” You can do it at the table read with the network executives there, you can do it when the camera is rolling – he doesn’t want you to ask for permission. It’s basically, “Give me a version the way I wrote it and do what you think is funny in addition to that.” Half the time he’ll use it, and half the time he won’t. So it’s just a guy who knows what he likes, but what he tends to like is what the people that he’s hired bring to it. And that’s just great for everybody, whether it’s an art director or a set builder or an actor.

AX: Did you envision Charlie becoming quite so outrageous when you first got the part, or did you just think at the time, “Well, this is a nice sidekick role, and David Duchovny seems fun”?

HANDLER: Yeah. I mean, I’m not even sure it was written as a sidekick role – in the pilot, it was one small ensemble scene, so that’s all you see at the beginning. It’s really exciting and gratifying to me that Charlie became the guy who carries the B storyline through every episode. I think that’s just Tom liking the combination of his writing and me, and liking the way that it worked for the show. But also, Charlie was written originally for the pilot episode, before we shot it, as a closeted gay man who in the course of the first season reveals himself as being a gay man, and that was left over from a screenplay version of this that Tom had written. And before we even shot the pilot, he came to me and said, “Would it be upsetting to you if it didn’t go that way?” Because that’s what it was when I was cast. And it certainly has been surprising to me – it’s been strange to me that since my fortieth birthday, I’ve somehow turned into the guy who’s probably appeared nude on television more than anyone in the history of the medium. I don’t know why that happened, but it sort of seems to have happened since the two shows I’ve done in a row [and there have been a large] number of fictional orgasms I’ve performed over that decade.

AX: During hiatus, do you still perform TIME ON FIRE?

HANDLER: I thought you were going to ask in my hiatus, if I get naked and perform fictional orgasms. I have not performed TIME ON FIRE in many years. The book, as well as the second book, IT’S ONLY TEMPORARY, were just issued for the first time as e-books in all formats. They’re just available now for the first time throughout the world in e-book formats. And that came after a long period of actually having to regain the rights to my own life story from the publishers that held them and put them out of print. It’s the second time I’ve had to do it. Once I sold the rights to TIME ON FIRE as a screenplay and didn’t want to continue it and had to endure lawsuits to stop a company from making the story of my life into a film. And now the books were both retained by other people, and I had to get the rights back in order to re-issue them as e-books. It’s a strange, interesting story. IT’S ONLY TEMPORARY was a difficult editorial process, so this allowed me to rearrange it and rework it and add material that was never included before, so it’s the author’s cut. The book is out now in all e-book formats throughout the world. I would say universe, but I’m not informed enough to know how far that reaches.

AX: Might you do IT’S ONLY TEMPORARY as a stage show?

HANDLER: I don’t think so, but I have thought of doing TIME ON FIRE again. It was long ago now, and I’ve thought of a Whatever Anniversary, going back and doing it, and the question was really, do I do it exactly as it was, which wouldn’t really be an accurate story for today, or would I take material from IT’S ONLY TEMPORARY, or even whatever I just felt like saying, and go on from there? And I don’t know. I may do that. I don’t have any plans to do it, but I think unfortunately, it’s still as worthy a topic in some ways. In terms of just the population of the world as survivors of illness, it’s even more of a topic. In terms of problems in medical care, it’s just as much of a topic. So it’s still a really worthy story, I think.

AX: Do you have a website where people can keep up with what you’re doing?

HANDLER: Oh, yeah, there’s EvanHandler.com. Right now, it’s actually being rebuilt, so you could have a page holder thing, but yeah. It’s a good one, actually. There’s a great guy inAustin,Texas who did it for me and he’s redoing it. He did great animation on it and it’s a very nice website.

AX: Is there anything that you’ve done on the show so far that’s been a particular favorite scene of yours, or something you really wish that they hadn’t made you do?

HANDLER: There isn’t anything I wish they hadn’t made me do. There’s some stuff this season that I think is going to be touchy, because in the early part of this season, Charlie comes upon an openly gay major movie star that he wants to sign as a client, and the guy makes it known that he wants an openly gay agent, and Charlie pretends to be a gay man. I think that stuff is very funny, and yet to some people, it might be kind of offensive, pretending to be gay, or being a straight man caught in gay situations could be so uncomfortable. But I really think for the majority of the seasons, and it’s been amazing that Tom’s been able to sustain it for over six seasons, I think it’s been a show that’s really tapped into a kind of antagonism that can exist in sexual relationships, and I really appreciated the honesty about that, and although with my character, it’s done in really heightened comedic form, I still think there’s an underlying truth to that, what I just said, as well as what happens to people when their sexual desires have been pent up for so long, and then they’re suddenly granted that opportunity. What kind of explosions of misbehavior and misdirected behavior does that prompt? And bad judgment in pursuit of really human desires? I think that’s been a really worthy exploration.

HANDLER: You know, honestly, I thought publishing the e-books was as simple as, okay, you make a click and the text is there. But I tried to do in seven weeks what apparently is a four- to six-month thing of getting it checked and double-checked and getting it converted, and I had to hire designers to do the cover art, because those [original print] covers didn’t belong to me. They’re the intellectual property of the print publishers. So I became a publisher over the last several months. I had to hire designers and went through a whole process of coming to covers with them, and reworking IT’S ONLY TEMPORARY. I got to rearrange the running order of the material and add two essays that hadn’t been in it previously, so that’s really what’s been dominating.

AX: Is there anything else you’d like to say about CALIFORNICATION right now?

HANDLER: It’s something I’ve been really proud of. I think David has been at least somewhat recognized for pulling off a role that I think very few people could do and that he does with really unique style, and I think Tom Kapinos has been really under-heralded for what he’s managed to do with the show over several seasons.