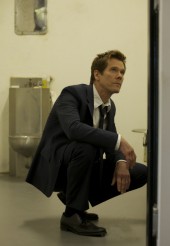 Having watched every episode of the excellent Fox series 24, I wasn’t sure how THE FOLLOWING might follow in its footsteps (if at all) or if it would be an altogether new series.

Turns out from the initial “Pilot” episode, it will be a bit of both. 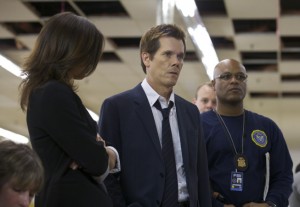 First off, THE FOLLOWING appears it won’t be for the faint of heart. There were literally dead bodies everywhere in the opening episode – some extremely brutalized and tortured. For someone that enjoys this type of carnage and horror-type programming, it was a welcome sight to behold especially considering most television program shy away from showing even blood let alone bodies that have been mutilated or stabbed repeatedly.

The season premiere begins with introducing us to Ryan Hardy (Kevin Bacon), a former FBI agent that was removed from duty after difficulties dealing with the after-effects of catching serial killer Joe Carroll (James Purefoy). When Carroll escapes from prison one month before he was set to be put to death, the FBI calls Hardy back into action to help them catch him once again. Unfortunately, Hardy is not welcomed back and is the object of suspicion from the word go.

However, Hardy has a lot of ties to Carroll beyond just catching him in the process of attempting to kill his last victim, guest star Maggie Grace, but he had some intimate moments with Carroll’s wife, Claire (Natalie Zea), that didn’t sit to well with Carroll.

Carroll’s intention has the episode progresses is not only to kill for pleasure (as he has done in the past) but to make Hardy pay for not just catching him but for sleeping with his wife. That means finishing what he started with his last victim in Grace’s character and setting up Hardy for a long road ahead of him as he must now deal with his acolytes that he has been grooming as serial killers for a number of years.

THE FOLLOWING is more about the serial killers that worship Carroll more than Carroll’s involvement in the killings (although the “Pilot” episode had many deaths at his hands). Subsequent episodes will be chasing these serial killers that have adopted Carroll as a role model.

Purefoy is absolutely brilliant as the mastermind behind this plan and he plays the pure evil character of Carroll extremely convincing and luckily it seems he won’t be leaving any time soon on the show so we can expect more from him. Bacon is actually surprisingly comfortable in his first television role and he is also very convincing as the flawed hero with a bad heart (as a result of the confrontation with Carroll) but still looking to contain this cult of evil that has emerged.

While it isn’t 24 has it pertains to serial killers rather than terrorists or a plot against our nation, the season-long arc that will be the plotline is a welcome return to Fox that has been missing since that show ended. Look forward to seeing what happens next.