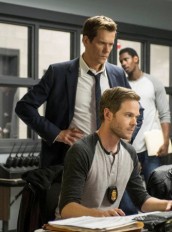 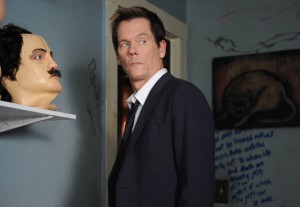 Kevin Williamson famously created the big-screen SCREAM franchise and, as executive producer/writer brought L.J. Smith’s VAMPIRE DIARIES novels to television in the successful series still running on the CW, where Williamson had previously created DAWSON’S CREEK. Williamson’s new series creation, THE FOLLOWING, is both bloodier and more serious than his previous work.

THE FOLLOWING, which airs on Fox Mondays at 9 PM, deals with haunted FBI Special Agent Ryan Harding, played by Kevin Bacon. Ryan once before put away charming, brilliant serial killer Joe Carroll (James Purefoy), at great psychological and personal cost. In the first episode, Joe escaped from prison. Ryan recaptured him, but it turns out that putting Joe behind bars is no protection from his crimes – because Joe has developed a loyal following of anonymous acolytes who will do anything he says, from kidnapping to maintaining long-term false identities to murder.

At a party thrown by Fox for the Television Critics Association, Williamson leads us to more information about THE FOLLOWING.

AX: How did you wind up with erstwhile movie star Kevin Bacon as your leading man? Did Fox already have an arrangement with him to do a television series?

KEVIN WILLIAMSON: No. He’s represented by WME, like me. I had mentioned I’d love to get someone like Kevin Bacon for a role like this, because I wanted someone with that gravitas and that ability. I wanted a leading man who was also a character actor, and that’s what you have with someone like Kevin Bacon. And they go, “Well, why don’t we give it to Kevin Bacon?” I’m like, “Oh. I didn’t think he was doing TV.” And then he read it and he wanted to meet me.

AX: Kevin Bacon has played a few psychos himself – THE RIVER WILD, HOLLOW MAN and X-MEN: FIRST CLASS come to mind. Did any of those performances factor into your development and/or casting?

WILLIAMSON: It was really interesting, because when I heard he was interested, I’m like, “Well, what role does he want to play?” Because he could honestly play either role [Ryan Harding or Joe Carroll], that’s how good he is. And then one of the agents I was talking to was clueless and he hadn’t read the script, and he said, “Oh, he wants to play the hero, Joe Carroll.” I was like, “No, the hero’s Ryan Harding, what role …?” “No, he wants to play Joe Carroll.” “The hero?” “Yeah.” The funny thing is, all the way through the meeting [with Bacon], I didn’t know what role he wanted to play, because they got it all mixed up. And then I was, “He’s going to want to play Ryan Harding, I’m sure of it.” Because let’s put it this way – I want him to play Ryan Harding because I want to see him be a hero again. Because I feel like he has played these interesting, quirky, crazy people. I wanted to see him being a hero. I wanted to see him John Wayne his way in and take out the bad guy.

AX: Ryan Harding is the hero, but does he have any dark sides?

WILLIAMSON: He is the hero, but he’s a flawed hero. He does color outside the lines.

WILLIAMSON: I don’t really get into the sexuality of those characters. I get into whether or not they are living in reality or not. I think a couple of those characters can’t quite withstand the psychosis, and it’s not about whether they’re gay or straight or bisexual, it’s really just about whether they’re in touch with reality or they have taken a break from reality and are about to snap and go crazy. Because I don’t think, for instance, the Paul character really knows. He posed as a gay man for two years, and he’s not really sure what’s reality and what’s not. So I think what’s really happening in that house of psychos [between Paul and his two Follower roommates] is that they really need to come together as human beings and figure out how to comfort each other, be friends with each other. It’s more about bonding, about a need and a want to fix each other and to help each other. It’s more about friendship. I think when you see the first four episodes, you sort of get that when they get in the shower, it’s not really about sex, it’s about them needing each other.

WILLIAMSON: Yeah, they were a little bloody [laughs]. They have to clean the blood off.

AX: Without getting too spoilery, is Season One building to some sort of climax?

WILLIAMSON: Yeah. There is definitely a plan in place. Joe Carroll has got a plan. There’s something that he wants very much. And as the show progresses, we’re trying to figure out what that is. And he has a motive, he has a plan – he may have a double motive, actually – and he’s building to something that he very, very much wants and needs, and whether or not Ryan can stop it or not remains to be seen. And it involves Ryan. And it also launches us into second season.

AX: Is this a master plan Joe Carroll has always had, or did he develop it just since he’s been in jail?

WILLIAMSON: As a result of what happened to him, is his master plan, and it’s the simplest plan in the book. It’s rooted in one idea.

AX: Does he want a world where everybody is a serial killer?

WILLIAMSON: No, that’s a little bigger than we’re going.

AX: You have said that characters can be killed. So will we be seeing new characters come in to repopulate the show as the season progresses?

WILLIAMSON: We will. You’ll see characters die – characters who [currently are regulars].

AX: Where do you shoot THE FOLLOWING?

WILLIAMSON: It’s a thriller, of course, but [some people] to be very much focused on the violence, and I’d love for people to be able to see beyond that. I don’t write the show for the violence, so I hope that’s not the takeaway. I would be sad if that’s all people got from it. I think that it’s an emotional drama, and I hope people give it a chance.