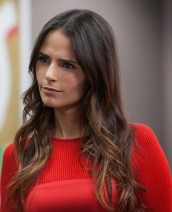 Lines have been crossed! 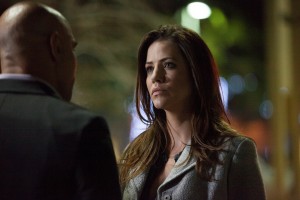 Sadness and excitement can be felt with the kick off of DALLAS: season two. With the loss of Larry Hagman, though not yet dealt with on the show – he finished six episodes before his death last November, I still can’t help while watching some of his last performances that soon there will be no more. As distracting as it can be, we are still blessed to have the show continue in honor of his legacy.

And boy, they don’t waste any time getting back to the bribery, seduction and  vengeance. John Ross (Josh Henderson) is out for blood after loosing Elena (Jordana Brewster) to Christopher (Jesse Metcalfe) last season. Now he seeks control of Ewing Energy and revenge on his cousin and ex fiancée. Meanwhile Annie’s (Brenda Strong) ex husband Harris Ryland (Mitch Pileggi) claims to have found their long lost daughter who at just 18 months was kidnapped from her mother at an amusement park. However, if Annie wants the location of Emma, as always, there is a price she’ll have to pay.

Christopher’s estranged wife Rebecca, whom we now know as Pamela Rebecca Barnes, the daughter of Ewing arch nemesis Cliff Barnes, seeks a divorce and not an annulment from Christopher so she can stake her claim in Ewing Energy.

Everyone wants a piece of the pie and nobody is willing to back down. DALLAS is back and everybody is fighting hard to get what they think they deserve. John Ross and dear old dad J.R. (Larry Hagman) concoct their plan to take control of the company while Pamela tries desperately to claim a chunk of Ewing enterprises through a divorce settlement. Elena is given a larger share of the company for her contributions and poor Bobby (Patrick Duffy) and Christopher try to keep Ewing Enterprises in their control.

Poor Sue Ellen (Linda Gray) loses the gubernatorial race cause of an unearthed scandal and lo and behold who comes to her rescue but her dear old ex J.R. who blackmails the A.D.A. into not pressing charges against her. It’s sweet to see J.R. want to take care of Sue Ellen after everything they’ve been through. She definitely brings out the softer side of J.R. The scenes with Hagman and Gray are so heartfelt and touching it’s hard not to think how very few more of them we will get to  see.

The show continues to prove itself in the first episode to be worthy of a long run on television ala 1978-1991, yet again. And, yet I can’t help but wonder how, without J.R., will it be to watch DALLAS come episode seven.