Interview: DALLAS star Julie Gonzalo talks Season 2 and being a villain on TV

The actor also talks about the loss of Larry Hagman, getting a steady gig, her Twitter followers and more 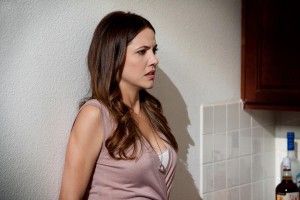 Julie Gonzalo feels especially blessed to be working in a field where more than half of her fellow actors are still looking for a steady gig and to also be a part of a hit TV show. Gonzalo plays the conniving daughter of Cliff Barnes (Ken Kercheval) – Pamela Barnes on DALLAS. The show now beginning its second season proved to be a hit last summer when it premiered. The success of the show has certainly made people notice Gonzalo.

“I definitely have a lot more fans,” laughs Gonzalo. “It’s really nice when you put your work out there and people really respond to it. You get Twitter followers or Facebook followers or just emails and fan letters.”

Gonzalo’s character of Barnes is hardly one with high scruples, yet she says she is happy the fans love to watch her and that most of her feedback is very positive. Last season, Ms. Barnes was a big mystery to everyone including the Ewings who thought of her as Rebecca Sutter, Christopher Ewing’s (Jesse Metcalfe)new bride. Little did anyone know of her masquerade which all unraveled at the end of season one. This season, says 31-year-old Gonzalo, what you see is what you get with Pamela.

“You can expect the truth from her this time,” says Gonzalo. “She’s coming clean to everyone. And this is who she is going to be. So, you finally get to really get to know this character for who she truly is and not the mystery that she was last season.”

Although Gonzalo admits to loving the suspense, she is happy to bring her character out into the open for the fans to see. “I think the beauty of being honest is that there’s many different levels to her and there’s a vulnerability to her,” explains Gonzalo. “There’s a lot of things that I get to play with this year.”

It’s no secret the feud her TV father Cliff Barnes and the Ewings have had for decades. In fact, it’s more than hinted that dear old dad put her up to snagging Christopher’s heart and than stealing his fortune. Only what Rebecca, AKA Pamela, didn’t expect was to actually fall for the dashing Christopher which complicated matters even more.

The challenges of going deep into a character’s background is appealing to Gonzalo who, with Pamela, gets to go pretty deep. “As an actor that’s the fun part,” says Gonzalo. “I get to explore that and I get to go into different levels that I’ve never been in.”

Another man Gonzalo herself hopes to honor is Larry Hagman, whom she says the whole cast is very aware of his contribution to the DALLAS legacy as they continue to do the show after his passing last November.

“We still talk about him on a daily basis,” reveals Gonzalo. “I think the first weeks, months of his passing it was very somber on set. In a strange way I think it united us and it really made us all close.”

Gonzalo says the whole cast and crew feels they are doing the show for Hagman. “Our motto became, ‘Let’s do it for Larry,’ ” says Gonzalo. “We get to unite and really honor this legendary iconic person on and off screen.”

Getting to be a little bit of a “villain” herself she gets a little taste of what Hagman endured for so many years. Still, there will only be one J.R. Ewing in the history of television and sadly he graces DALLAS no more. But Gonzalo is confident with the continuation of the show they are doing what Hagman would have wanted them to do. “He would have wanted us to have a smile on our faces and to continue on and to make the show what he made the show.”

Gonzalo is grateful to have known Hagman and grateful for the opportunity she received in getting cast in the show. Without Hagman’s involvement who knows if the show would have ever been rebooted in the first place. “We’re all very, very lucky,” says Gonzalo.