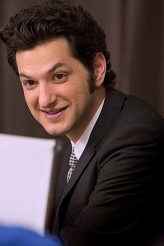 The actor also talks PARKS AND REC, plus his new screenplay 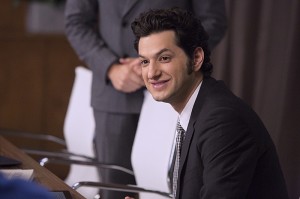 HOUSE OF LIES, Showtime’s dark comedy about a team of ruthless management consultants, is now in its second season, Sunday nights at 10 PM. In the series created by Matthew Carnahan, Ben Schwartz plays team member Clyde Oberholt, who envies boss Marty Kaan (Don Cheadle, who is also one of the show’s producers) and would like to seduce colleague Jeannie van der Hooven (Kristen Bell).

As a performer, Bronx native Schwartz is also a member of the comedy group Upright Citizens Brigade and has a recurring role as Jean-Ralphio on PARKS AND RECREATION, as well as voicing the animated hero of RANDY CUNNINGHAM, 9TH GRADE NINJA. He also has upcoming projects as a writer and producer.

In person at a party thrown by CBS/Showtime, Schwartz is admiring the spontaneous dance moves of Emmy Rossum and Shanola Hampton, both regulars on HOUSE’s Showtime neighbor SHAMELESS. “They’re gorgeous,” he observes. He takes a few minutes to provide an update on his current endeavors.

AX: Were you happy with the way that HOUSE OF LIES Season 1 wrapped up for your character Clyde?

SCHWARTZ: I loved it. For my character especially, I win this big award and then the entire business kind of explodes, which leaves this next season to be anything.

AX: Do you know where Clyde will be at the end of Season Two?

SCHWARTZ: I don’t know. I feel like Cheadle knows more about this stuff than I do, because he gets to produce and everything.

AX: Are you returning to PARKS AND REC this season?

SCHWARTZ: I am. I can’t wait. I’m growing out my hair. It’s going to be as silly and crazy as possible.

AX: What else have you got coming up?

SCHWARTZ: I did a couple of independent movies and I’m doing a movie in a week, and then I’m writing. I sold another movie to Universal. It’s a romantic comedy called NO HEARTS CLUB. I can’t say anything outside of that. But it should be fun. Imagine is producing; Universal is the studio.

AX: And what are the movies that you are in?

SCHWARTZ: I just did a movie called COFFEE TOWN, with Glenn Howerton and Josh Groban and Steve Little, and then I did a movie called BETTER LIVING THROUGH CHEMISTRY with Sam Rockwell. It should be really funny. I can’t wait for it to come out.

AX: Anything else you want to say about HOUSE OF LIES right now?

SCHWARTZ: I want people to watch. I’m so excited for the second season. I think people will be really psyched. And if you missed the first season, get it on DVD. We did commentary for it and it was bonkers. It’s so fun.