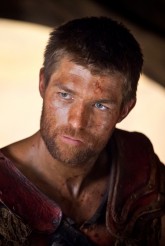 Lots of blood guts, Roman panic, and a new adversary! 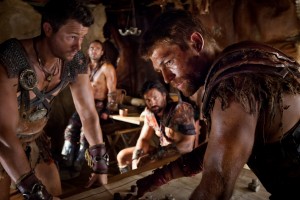 SPARTACUS WAR OF THE DAMNED is here! The final chapter in the STARZ SPARTACUS saga and boy oh boy is this last season going to be a doozy. If you thought the boundaries were pushed before in terms of blood, violence, sex, and more blood and violence; you had better hold onto your butts. Before I get to the first episode “Enemies of Rome”, let’s do a quick recap of who died in the finale from last season (SPOILER ahead if you did not watch the Season 2 finale – be warned!).

So pretty much for our new season we have all new forces from Rome to oppose Spartacus (Liam McIntyre) and his freed slave army. This episode sets up the huge conflict to come this season, even in the first few minutes as Spartacus and his band decimate thousands of Roman soldiers. This is yet another catastrophic loss to Rome, and the senate is forced to turn to a man who is not noble by birth, and who worked to have the wealth and power he has now. That man is Crassus (Simon Merrells) who is a different type of Roman entirely, and he has been educating himself in armed combat with a gladiator champion he has purchased from the arena. Crassus is not an egotistical, overbearing Roman and has the sense to see the intelligence in all of Spartacus’ moves and how to potentially counter them. He is an interesting character, and a likeable adversary for our leading man. His son Tiberius (Christian Antidormi) is more the normal arrogant Roman, and as battle is nearing it will be interesting to see if he is going to be a better man like his father, or fall under the heel of Spartacus.

Lots of familiar faces return this season in Spartacus’ camp, and so far there seems to be a unity among the freed slaves that follow him. It appears for the time being that all of the squabbles of last season and the differences of the melting pot of lands that is formed by the camp is more of a whole than it was. Once pressure is on from Rome this season, I have a feeling that a lot of things are going to hit the fan. Caesar (Todd Lasance) is on his way this season, and the rebellion doesn’t end well historically for the army of Spartacus so let’s just see how bloody this season can get!