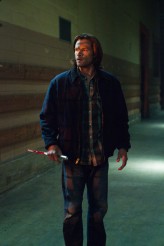 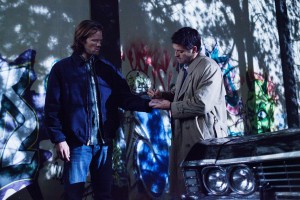 SUPERNATURAL comes roaring back from its winter break with a zippy catch-up montage set to Bob Seger’s “Katmandu,” and then launched into “Torn and Frayed,” which is how Sam (Jared Padalecki), Dean (Jensen Ackles) and Castiel (Misha Collins) all feel, what with the brothers relatively estranged and Cass trying to cope with urges he doesn’t understand. We know, though Cass doesn’t, that he’s forced to forget all of his meetings with self-proclaimed Heavenly representative Naomi (Amanda Tapping), who tells him what to do and how to pretend it’s his idea.

When kindly young angel Samandriel (Tyler Johnston) is being tortured by King of Hell Crowley’s (Mark A. Sheppard) minion Viggo (Vincent Gale), who starts spilling angelic secrets, Naomi commands Cass to rescue him. Sam has a quasi-ultimatums from on-again, off-again married lover Amelia (Liane Balaban), who is ready to leave her husband if Sam is ready to commit to her. Sam also gets a visit from Dean, who isn’t happy that Sam seems to really want out. However, Castiel enlists both brothers in his quest to rescue Samandriel.

Samandriel, alas, isn’t aware that he’s spilling ancient secrets in an archaic language, including the existence of an angel tablet that could prevent angels from leaving Heaven. After Castiel rescues Samandriel, Naomi commands Cass to kill the poor guy, which Castiel does. (Per Naomi’s instructions, he tells the perplexed Winchesters that this was self-defense.) Cass, disturbed and bewildered by his own actions, takes Samandriel’s remains back to Heaven.

Sam tells Dean that, while he’d like a life of love and normalcy, it seems the stakes are too high for Sam to quit Hunting. Amelia shows up for the rendezvous that will determine if she and Sam are to have a life together, but he’s not there. Dean and Sam settle wordlessly at opposite ends of a couch to watch TV.

In other news, poor Kevin Tran (Osric Chau) is having no luck translating his half of the anti-demon tablet and Dean says goodbye to his vampire buddy Benny (Ty Olsson), who is having a tough time alone.

“Frayed and Torn” represents something of an all-star blowout for SUPERNATURAL, with Collins, Sheppard, Chau, Balaban, Tapping and Olsson all in the same episode. (The absence of DJ Qualls’ character Garth, who is supposed to be guarding Kevin, is explained by having him out on a grocery run.) It’s a nice way of reminding us who most of the major players are on the field right now, even if Amelia and Benny seem to have been brought in so that they can be written out.

We fear for Castiel, who is clearly mixed up in something sticky and is worse off for not even knowing it. Tapping is great at Naomi’s  whole velvet glove over steel warhammer demeanor, and Balaban and Olsson are likable, albeit the script provides solid reasons why their characters can’t hang around.

Sheppard is naturally entertaining as usual, though both the story and the meta arcs are unclear, which is to say that in the narrative, we can’t tell if Crowley is up to something even bigger than controlling the tablets, and in studying how the series is made, it seems like they can’t lock the Gates of Hell in the event there’s a Season 9.

Finally, there’s reconciliation between Sam and Dean. This season, it’s taken until Episode 10. It’s tempting – okay, it’s irresistible – to complain about their repetitive sibling dynamics, but this may in fact be one of the things that viewers tune in to watch. After all, people watch SHARK WEEK knowing they will see sharks; people watch SUPERNATURAL knowing they will see Dean and Sam fume, remonstrate and finally accept each other again. “Torn and Frayed” brings the current cycle to a graceful, apt conclusion.