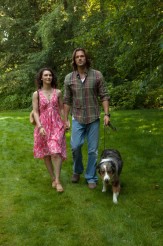 A straight down the middle procedural episode, directed by Jensen Ackles 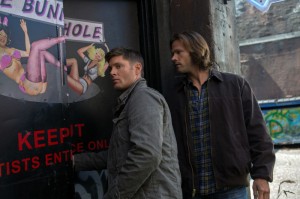 SUPERNATURAL tends to be a series with season-long arcs (sometimes multi-season-long arcs), but every now and then, it offers an episode that is almost entirely procedural. Such is the case with “Heartache.” Yes, Sam (Jared Padalecki) is making noises about wanting to hang up his hunting spurs and live a normal life once he and Dean (Jensen Ackles) have found the missing Prophet of the Lord Kevin, but mostly, the Winchester brothers piece together clues and then confront some self-serving monsters.

When Dean reads of a jogger who has had his heart ripped out in Minneapolis, he persuades Sam that they should look into it. The trail leads eventually to dead sports hero Brick Holmes, who was actually an ancient Mayan who made semi-annual blood sacrifices to the god Cacao in exchange for eternal youth and physical prowess. In the last century, Brick would change his identity and sport every decade or so. However, when he fell in love with Betsy (Patty McCormack), Brick realized she would outlive him and, perhaps, killing people twice a year was getting to him. Brick committed suicide by driving off a bridge.

The catch, and where our boys come into it, is that all of the recipients of Brick’s organs are following in his heart-stealing footsteps. Betsy advises Sam and Dean that if they take out Randa (Kyra Zagorsky), the woman who received Brick’s heart, that should stop the others. Randa briefly gets the drop on Dean and tries to kill him, but the brothers prevail, and Randa’s death causes the other organ recipients to die.

Meanwhile, Dean discovers that Sam has been checking out college applications, and Sam fondly recalls a birthday picnic with Amelia (Liane Balaban), his lover the year that Dean was in limbo.

The investigation/mythology aspect of “Heartache” is decent, neither bad nor inspired. Ackles does a good job of directing, and his father Alan Ackles has a nice turn as a police detective who is exasperated by the case.

As far as Sam’s desire to live like other folks, it’s understandable, but with all the years of seeing what happens when anybody gets close to him or Dean (remember the upshot of Dean’s efforts to live as a family with Lisa and Ben?), we don’t know why he thinks he’ll be left in peace this time. We also don’t know why Dean doesn’t pose this question, except maybe that there isn’t running time in the episode for the discussion.

“Heartache” also harks back to the beginning of SUPERNATURAL, when Sam resented Dean from dragging him out of college and they had a loose quest to find their dad while following their general monster-killing mandate. It worked back then and it works well enough now, though it’s hard to imagine the episode will make many best or worst lists. It’s enjoyable but not especially memorable.