Mark Pellegrino, aka Lucifer, makes a welcome wisecracking return in a tale with some nice twists 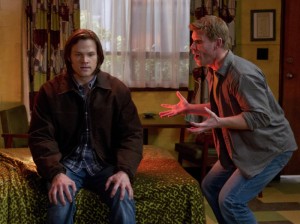 The standalone plot of SUPERNATURAL’s “Repo Man,” scripted by Ben Edlund, dovetails nicely into the arced storyline, featuring Sam (Jared Padalecki) being continuously bedeviled by his visions of Lucifer (Mark Pellegrino). The thematic resonance between the two works well, and having a recurring smartass along for the ride, especially one as insinuatingly menacing as Pellegrino’s Devil in Chief, works even better.

Four years ago in Idaho, Dean (Jensen Ackles) did most of the work in exorcising a woman-killing demon from Jeffrey (Russell Sams), a seemingly nice young man. The exorcism involved beating the hell out of the demon – who, unfortunately for Jeffrey, was residing within at the time. Jeffrey, given a moment of lucidity, tells Dean and Sam to do whatever they need to do, and Dean gets the demon to spill some information about Lilith (remember her?) before the exorcism ultimately works. Dean drops Jeffrey off at a hospital.

Four years later, Nora (Nicole Oliver), the good Wiccan witch who tipped the Winchesters off to the possession in the first place, is afraid the demon is back due to a new string of serial killings. Jeffrey is living in a group home, but seems to be making progress. Sam and Dean talk to him – the beating took a toll on Jeffrey’s life. He lost his job, became an alcoholic, started talking about the demon and wound up in psychiatric care. Sam, meanwhile, is seeing and hearing Lucifer a lot more these days, though he doesn’t let Dean know.

Dean, searching for the demon, finds a young man tied up in a chair. Then Dean gets a needle in his neck. Sam starts to worry when he can’t reach Dean on the phone and finally starts listening when Lucifer offers help. Lucifer leads Sam back to Nora, who says that Jeffrey came to her and asked her to summon the demon. When Nora refused, Jeffrey kidnapped Nora’s son and cut off his ear. Sam says that it seems unlikely that particular demon could be summoned again – he’d be locked up tight in Hell after betraying Lilith. Nora says that’s why Jeffrey needs the blood of the exorcist – Dean – who banished the demon in the first place.

With both Dean and Nora’s son tied up, Jeffrey sacrifices a dog he’s just adopted from the pound and explains that he loved his demon. The demon allowed Jeffrey to be the serial killer he always wished he could be; Jeffrey feels incomplete without him. But when Jeffrey summons the demon, it jumps into Nora’s son instead of Jeffrey. The demon explains that he was just there to bring out Jeffrey’s potential – Jeffrey doesn’t need him any more in order to be a serial killer. Nora’s son, on the other hand, shows no potential. Then the demon realizes he’s walked under a demon trap painted on the ceiling. Sam and Nora come in – Nora exorcises her son, Sam shoots Jeffrey and all seems well.

Then Sam and Dean go back to their motel. Dean promptly falls asleep, but Sam is kept awake by Lucifer, who says Sam has let him back in – and Sam sees the room as being on fire.

The little twists in the story are fun and smart. It also makes sense emotionally to have Jeffrey kill the dog – we don’t know his human victims, but the dog is so charming that we want to see this s.o.b. smote down at once.

However, the richer material here is the interaction between Sam and Lucifer. Pellegrino doesn’t overdo it, but he really conveys that this guy has all the time in the world and yet still enjoys teasing Sam with pretending to be bored, lonely, etc. Padalecki takes Sam from diligently ignoring Lucifer to starting to interact with the devil without even being fully aware he’s doing so – it’s a good, smooth segue. The dynamic between them livens up the proceedings in the way the sarcastic otherworldly characters often do on the show (think Crowley and the Trickster), which tends to bring out the best in SUPERNATURAL – spooky, serious drama with a little snark about it all.

It’s also nice to see in Nora a female character with some innate power who uses it, survives the episode and doesn’t seem too histrionic about things. Again, the right tone is struck.

As for the episode’s finale, well, we do love Pellegrino’s Luci a bit despite ourselves, so we’re eager to see where he and Sam go next.