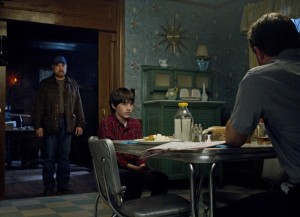 How do we know the prognosis for Bobby Singer (Jim Beaver) is dire on this episode of SUPERNATURAL? It’s not because he’s got a bullet lodged in his brain, thanks to getting shot by Leviathan big boss Dick (James Patrick Stuart). Instead, it’s because show runner Sera Gamble wrote “Death’s Door” and producer Robert Singer (yes, Bobby is named after him) is the director. When there are two heavy hitters behind the scenes at the same time, odds are that something momentous is happening.

In the previous episode, Bobby discovered something specific about the Leviathans’ evil plans for taking over the Earth. Presumably, the notes said something more than, “Eat people!” At any rate, Bobby finds himself trapped in his own memories with former Hunter (of supernatural entities) pal Rufus Turner (Steven Williams) along for the ride. Rufus is dead and it’s not entirely clear whether this is his spirit or just Bobby’s mental image of him. Either way, Rufus is able to impart how he came out of his own near-death experience (as opposed to the one that finally killed him) – Bobby needs to find a door through his own worst memory.

Trying to avoid the grasp of a Reaper (Henri Lubatti), Bobby revisits some awful moments in his past, including his wife’s emotional meltdown when she realizes Bobby has no intention of having children, and a phone call from John Winchester, who berates Bobby for acting like he’s Dean and Sam’s father. However, Bobby’s very worst memory is from childhood, with his alcoholic father beating Bobby’s mother, and verbally abusing both woman and child. Adult Bobby confronts his father, saying that despite the fears that stopped Bobby from having his own kids, he adopted two boys who have turned out great. Young Bobby, in the memory, finally stops the abuse by shooting his father in the head.

This allows Bobby to briefly wake up and impart critical (if cryptic) information to Sam (Jared Padalecki) and Dean (Jensen Ackles), who have been waiting in the hospital. Sam is pessimistic and Dean is in full-blown denial about Bobby’s recovery chances. Then Bobby flatlines and the Reaper gives him a choice – come to his well-earned rest or stick around and become the kind of supernatural entity that Hunters eventually have to track down and destroy.

This last option is given such a build-up that it may yet pay off, and we don’t see what Bobby decides to do, but it does seem that this is the last we’ve seen of Bobby as a living man. As send-offs go, “Death’s Door” is intelligent, touching and funny, somehow not overselling Bobby’s bleak back story, but instead doing justice to it. Is this the kind of incident that could put someone off parenthood? Well, yeah. Is it the kind of thing he’d mention to anybody later on? Hell, no.

Beaver really inhabits every aspect of Bobby in this episode, from wariness to delight to fear to shame. It will be a great pity if SUPERNATURAL loses not only the character, but the actor who plays him. Ackles is also affecting in depicting Dean’s reaction to what’s happening. Granted, Dean has the showier response, as anger is usually more cinematic than resignation, which is what Padalecki as Sam is given to play.

Lubatti is a perfectly good Reaper, but the actor bears a confusion-making resemblance to Rob Benedict, who played the Prophet Chuck. If one doesn’t read the opening guest star credits on “Death’s Door,” it’s easy to spend the whole episode wondering if there’s some plot reason that Chuck is now a Reaper, before finding out that the Reaper is in fact played by a different performer.

SUPERNATURAL is also having a whole lot of fun with the name of its season-arc villain. There’s a sense that every time Dean calls the Leviathan Dick Roman by his first name, giggling is happening somewhere on set. There is a moral here: mamas, don’t let your Richard babies grow up to be called Dick.

“Death’s Door” isn’t scary. Instead, it is, like the characters, sad and angry and something one doesn’t normally expect of a SUPERNATURAL episode – it’s kind of lovely.