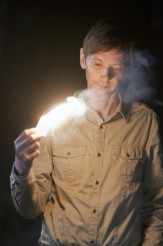 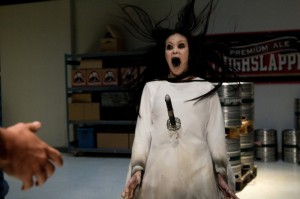 Sometimes when SUPERNATURAL tries to do a funny episode, it pushes too hard. However, the tone of “Party On, Garth,” written by Adam Glass and directed by Phil Sgriccia, hits just the right notes.

The premise combines two seeming SUPERNATURAL inevitabilities – a J-horror ghost and a monster (in this case, the aforementioned ghost) that can only be seen by people who are drunk.

Garth (DJ Qualls), the goofy but loyal Hunter we’ve met several times before, travels to Kansas to take out what he thinks is a standard ghost. When he destroys the bones and there’s another killing, he calls Sam (Jared Padalecki) and Dean (Jensen Ackles) for backup. Sam is in the midst of feeling guilty about Castiel, who is still in the mental hospital after taking Lucifer out of Sam and into himself. Sam even mentions THE RING as a reference point of handing off his problem/curse (at this point, we don’t realize we’re being set up for the episode’s particulars). Dean reassures Sam that Cass took on the curse of his own free will – Sam at that point was in no shape to consent or refuse.

There are more deaths in the small town. Dean, Sam and Garth discover that the proprietors of Thighslapper Ale – which turns out to be a fine beverage, despite Dean’s initial skepticism – wronged their brew-master so badly that he committed suicide. However, before he took his own life, he traveled toJapanto procure a “shojo,” or alcohol spirit (amazingly, nobody makes the obvious “spirits spirit” joke). These already unfriendly entities can be summoned like attack dogs. As the late brew-master considered Thigh slapper Ale his child, he has sent the shojo after the adult children of his former colleagues.

Dean discovers that the bottle ghost can be destroyed with a samurai sword that has undergone a Shinto blessing. Dean procures the sword, gets the blessing and shows up just in time to dispatch the spirit after she has thrown Sam through a wall and is zeroing in on Sam and Garth.

Afterwards, however, Dean recalls the sword was across the room and then suddenly in his hand. Previously (in other episodes), a book has coincidentally fallen open to just the right page, a bottle drank itself, and so on. Dean thinks maybe it’s Bobby’s spirit trying to get in touch. Sam thinks that maybe this is just part of the grieving process and Dean accepts this theory. When Dean goes to retrieve Bobby’s flask before the boys hit the road, the exasperated ghost of Bobby (Jim Beaver) can’t believe the “idjits” can’t see him.

Well, we can see Bobby and for most of us, his return couldn’t come soon enough. He brings an energy and perspective to the whole show that’s evident whenever he’s in it. We know Sam is looking for a bit of normality in his and Dean’s lives, but he’s shrugging off a few too many coincidences, given what he knows of the supernatural.

This is actually only a tiny bit of the episode, which is surprisingly funny and effective. Floating dead-white Japanese female ghosts with long hair and angry eyes may be a cliché by now, but they’re still pretty freaking creepy. The idea of an alcohol ghost makes perfectly good mythological sense – absinthe is associated with the Green Fairy, so why shouldn’t Japanese beer have its own entity? Also, a story wrinkle that not only encourages but requires the Winchester brothers to get soused in order to do the job is amusing and allows both Padalecki and Ackles to loosen up and let their characters relax without going over the edge.

Qualls exactly gets the tone of the material and likewise manages to fit his cocky but dedicated Garth into the overall framework. He has a bit with a sock puppet and a traumatized little girl that could easily have gone wrong in any number of ways, but the scene works (kudos also to whoever designed the humorously expressive puppet).

“Party On, Garth” has scares, laughs and the return of Bobby Singer. Party on, SUPERNATURAL!