TV Review: SUPERNATURAL – Season 7 – “There Will Be Blood” 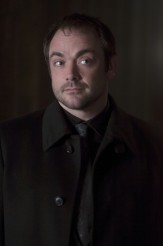 TV Review: SUPERNATURAL – Season 7 – “There Will Be Blood”

Fun and funny, though the dramatic Bobby situation ramps up 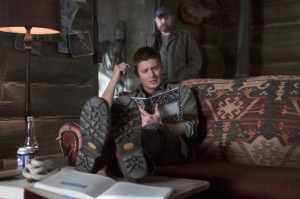 While the efforts of Sam (Jared Padalecki) and Dean (Jensen Ackles) to kill chief Leviathan Dick Roman (James Patrick Stuart) remain deadly serious, SUPERNATURAL’s penultimate Season 7 episode “There Will Be Blood” has a lot of fun with both real-life news and elements it has established.

Heard of high-fructose corn syrup, the unhealthy additive in almost every processed food? Well, in “There Will Be Blood,” Tricky Dick has acquired one of the main distributors of the substance, which is now being put into just about everything and turning people who eat it into plump and extremely passive prey.

This has two unexpected consequences. One is that the blood of these people is now deadly to vampires, who burn from the inside out when they feed on folks who’ve ingested the corn syrup. The other is that Dean, to his horror, finds that he can no longer eat any of his beloved junk foods. Dean is convinced he cannot go on like this. “I’m a warrior!” he wails in protest when Sam offers him healthy fruits and veggies.

There’s a lesson for us all in here, but as far as the plot of “There Will Be Blood” goes, the Winchester brothers now know how to kill Dick Roman. Of course, Dick has captured the prophet Kevin Tran (Osric Chau) for his own translation of the Word of God (initially addressed in the previous episode, “Reading is Fundamental”). Kevin gets off easy – Dick spares Kevin’s mother and gives Kevin a letter of recommendation to Princeton– but Dick now knows that the boys know.

Sam and Dean already have the blood of a fallen angel. They now need the blood of Crowley (Mark A. Sheppard), current Lord of Hell, who says he’ll give it to them – but first they have to procure the other two types of blood. Crowley apparently doesn’t know the boys have been in contact with Castiel, but he sends them on the trail of the Alpha Vampire (Rick Worthy).

Sam and Dean think they’re rescuing the virginal Emily (Laci J. Mailey) from the Alpha, but she’s been in his company for so many years that she’s developed total Stockholm Syndrome. The boys leave Emily in the hotel room with the ghost of Bobby (Jim Beaver), who is trapped there because Dean has locked Bobby’s flask in the room safe. When Emily calls ahead to “Daddy” to warn him, Bobby becomes so angry that he possesses a hotel maid to escape and affect the situation.

Sam and Dean tell the Alpha that Dick and the Leviathans have intentionally poisoned the vampire food supply (i.e., humans). The Alpha is dubious and has his hench-vamps lock up the Winchesters until he receives a visit from Dick’s right-hand Leviathan, Edgar (Benito Martinez), who not only confirms the Winchesters’ story, but tries to kill the Alpha. Fortunately for everyone, Dean and Sam escape from confinement and Sam decapitates Edgar. The Alpha Vampire gives Sam and Dean his blood and the boys depart – taking with them the Alpha’s current under-age minion/food supply.

When Dean and Sam return to their hotel room, they find the place a wreck, with both Bobby and the flask gone. How much worse can it get?

Dick summons Crowley, confining him under a demon trap, and wants a chat. Uh-oh …

In addition to taking on dietary woes – high-fructose corn syrup may not be engineered by Leviathans to make people lethargic, but it has that effect in real life anyway – “There Will Be Blood” also takes a forthright slam at the fourth wall. When the Alpha and the Winchesters decide to put aside their homicidal hatred until the Leviathan threat is dealt with, the Alpha doesn’t say “Goodbye” or “Until we meet again.” No, he says, “See you next season,” with an absolutely straight face. Granted, within the context of the episode, one can imagine he’s speaking of autumn as opposed to summer, but … it’s so out of the blue that the moment is actually funny, as well as cluing us in to at least one plotline to expect next year.

It should be noted that Worthy is one of the SUPERNATURAL actors who completely understands what he’s doing. The Alpha Vampire sees himself as a rightful king, with his own dignity, his own compassion and his own destiny. Worthy plays the character as the hero of his own story, and there’s something wonderful about seeing him clash with the Winchesters, who both come away a little perplexed by their adversary’s attitude.

Bobby’s spiritual deterioration is being handled thoughtfully. Rather than have the character do something destructive for the sake of effect, he’s presented with circumstances that demand action. Bobby wants to come to the boys’ rescue and the only way he can do it is to possess a living person. This no doubt won’t end well, but we understand how Bobby can rationalize this behavior.

It’s always a pleasure to see Sheppard as the grandstanding Crowley and Stuart remains splendidly smarmy as Dick. Never mind his plans for carnivorous world domination, he deserves a complete kicking just for being so unbearably smug.

“There Will Be Blood” accomplishes its purpose handily – it moves the seasonal arc forward while entertaining us the whole time.