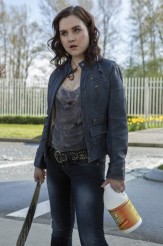 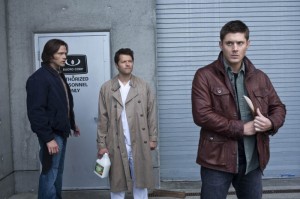 Before getting into discussing the episode proper, let’s take a moment to appreciate the SUPERNATURAL tradition of beginning each season finale with a montage of what has come before set to Kansas’ “Carry On, Wayward Son.”

It takes a certain type of show to earn a tune it can return to every year (HIGHLANDER fans will recall “Bonnie Portmore” filled a similar function, albeit not always at season’s close), but SUPERNATURAL, in its own purposefully crazy way, is one of them. By now, there’s something touching in this annual ritual that honors the characters and fans alike with the little clips that remind us of cool moments along the way while getting latecomers up to speed. It’s fun to see the bits the producers and editors choose and there’s something strangely inclusive about this annual ritual.

Meanwhile, top Leviathan Dick Roman (James Patrick Stuart) has summoned/trapped King of Hell Crowley (Mark A. Sheppard) to make a deal .Crowley and his minions can continue negotiating for the souls of Canadians, while the U.S.will belong to the Leviathans. Additionally, of course, Crowley will give the Winchester brothers a vial of demon blood that isn’t his. Since the boys specifically need Crowley’s blood to make a weapon that can kill Dick, they’ll make their run at Dick unprepared and he can kill them. Crowley agrees and pulls out an enormous Hell contract, which he and Dick proceed to haggle over in legal terms.

Bobby (Jim Beaver) loses possession of the unfortunate hotel maid (Larissa Gomes) and contemplates letting her go. Alas, Bobby spots a headline about Dick Roman in the newspaper and becomes so infuriated that he repossesses the maid and continues to head for Dick’s headquarters.

Castiel (Misha Colllins) has found that the Leviathans seem to have slaughtered all of the angels of Castiel’s former garrison. Still fairly unhinged, Castiel has made organic sandwiches for Dean (Jensen Ackles) and Sam (Jared Padalecki) as a peace offering, but he continues to insist he cannot help them fight Dick Roman.

Crowley arrives at a bad moment for everyone else – Meg (Rachel Miner) would rather he not see her, as he’s furious with her and Castiel isn’t one of Crowley’s favorite beings either, though Crowley soon sees the angel is fairly bonkers. Crowley gives Sam and Dean the vial of his blood – or is it? He explains about the deal with Dick, but he says at present, he’s more interested in getting rid of the Leviathans than in getting the Winchesters killed. Dean and Sam aren’t sure whether they can believe him or not.

We take a brief pause here to wonder what’s stopping the Winchesters from demanding that Crowley donate his blood in front of them so they can be sure of its provenance. Sure, there’d be arguing, but if Crowley  wants them to go in (as it turns out he does), he’d ultimately oblige. Okay, end of pause.

Sam and Dean do the ritual with the various bloods (angel, Alpha, King of Hell) on the bone of a righteous nun (taken from a crypt). There’s no sign that the ritual took.

Dean and Sam head for Dick Roman’s headquarters, only to see the possessed hotel maid on the grounds. Realizing this is Bobby, Sam tries to stop him/her. Bobby, within the maid, almost chokes Sam to death before realizing what he’s doing and leaving the woman’s body.

With the woman safely in a hospital, Sam, Dean and Bobby’s ghost have gone back to the cabin. Bobby apologizes for thinking he could remain a ghost without giving in to the rage that overtakes all spirits not at rest. He tells the boys they should have burned the flask much sooner. Bobby says goodbye, hoping to see them again on the other side – “but not too soon.” Dean sadly puts the flask on the fire and the camera remains on the boys’ faces as they watch Bobby’s spirit silently burn.

Castiel at last agrees to come along and help. Dean and Sam pull out all the stops, using Dean’s beloved Impala as a decoy, with Meg smashing it into the corporate logo in front of the building and beheading Leviathans so that Sam, Dean and Castiel can get inside.

Dick has used the arm of the real Dick Roman to make other Leviathans that look like him, but Castiel is able to point out the real one. Dick is stabbed with a fake bone, which doesn’t do anything, but the real bone is brought out. Dick is stabbed through the neck and disintegrates in what appears to be a dimensional wave. When he has gone splat, Dean and Castiel, who were behind him, have disappeared.

Crowley shows up. His demons grab Meg and he takes charge of the teenage prophet Kevin (Osric Chau). Crowley tells Sam that, without their leader Dick, the Leviathans are now just one more monster, so long as they don’t organize again. Crowley says he has no idea where Dean and Castiel have gone, leaving Sam absolutely alone.

Dean and Castiel, in fact, have been yanked into Purgatory. Castiel vanishes in the middle of explaining this fact to Dean, who is absolutely alone, in a dark forest surrounded by the souls of monsters.

Hey, it’s a SUPERNATURAL season finale, you were expecting Sam and Dean not to wind up totally screwed once again?

As an episode unto itself, “Survival of the Fittest” – evidently, this refers to Crowley– is a combination of fun and poignancy. Putting together Crowley and Dick and having them go over the epic contract is not only conceptually funny, it allows Sheppard and Stuart, both splendidly at home in their roles, to zing off each other. It’s delightful stuff.

Losing Bobby – well, it’s SUPERNATURAL, so don’t be too sure we’ll literally never see him again – is handled very affectingly and intelligently, giving us the sorrow of this departure without graphic images of Bobby’s spirit in flames. Ackles and Padalecki both handle the wordless scene with grace and nuance.

Collins appears to be enjoying and is certainly enjoyable in Cass’ whimsical but friendly new persona. Chau as Kevin is such a well-realized character that we hope he’ll figure into next season (Crowley’s grabbing of him would seem to signal this will happen).

Looking back on SUPERNATURAL Season 7 as a whole, it feels a little more like an extended episode than some others, with the appearance of a new monster at the beginning and the defeat of the monster at the end, rather than something that inherently challenges Sam and Dean and causes some sort of epiphany. Sam getting rid of Lucifer doesn’t count, as that was via Castiel’s intervention, rather than Sam being able to prevail on his own.

Still, there are things specific to Season 7 that we’ll miss. Fans of the superb Jim Beaver ought to be able to catch him on Season 4 of JUSTIFIED, as his not-wholly-unlike-Bobby character on that series has been elected county sheriff, but we’ll still miss Bobby’s wry, dry incredulity and Beaver’s sure-handed performance. (Who or what the heck are they going to use to leaven the mood next season?)

Then there is Stuart’s smug, expertly-realized Dick. Season 8 may yet provide the greatest adversary of all time, but it’s hard to imagine how SUPERNATURAL, or any other show, will ever come up with a villain with such an apt name that every single actor obviously relished saying so much, or that the writers ran with so far in such blissful silliness. (It would be interesting to know if the creative team actually took the high road in not overdoing the “Dick”/ “boned” puns in this final episode, or if Broadcast Standards did that for them.) Stuart deserves a lot of credit for playing the smarmy corporate monster with utter confidence and a great balance between twinkle-eyed humor and conviction.

So carry on, SUPERNATURAL. In a time when many genre shows feel a little interchangeable, you’ve got your own crazy identity, and we’re glad you’re not ready to lay your weary head to rest just yet.