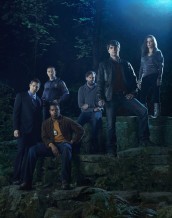 Tons of stuff happens and it makes you want more - now!

The Season 1 finale of GRIMM is here, and the mythology of the series firmly takes over by scattering tons of intriguing plot threads that will need to be resolved when the series returns in the fall.

Throughout the season, cop Nick Burkhardt (David Giuntoli) has been dealing with his newfound ability to see Vessen – creatures that we thought only existed in fairy tales. He’s also one of the last in a long line of Grimms who can also stop these creatures from doing harm to others..

After essentially neutering witch Adalind (Claire Coffee) early this season (Nick extracted her witch essence), there’s a bit of revenge to dish out. So Claire decides to punish Nick’s girlfriend Juliette (Bitsie Tulloch) by giving her a cat scratch.

Nick knows there’s more to the cat scratch, though Juliette thinks Nick is over-reacting. This becomes the big moment where Nick tells Juliette his big secret about being a Grimm – and she doesn’t believe him.

Juliette ends up in the hospital and no one knows what’s happening to her. Meanwhile Monroe (Silas Weir Mitchell) and Rosalee (Bree Turner) start working on some kind of remedy.

Meanwhile, a mysterious thug appears looking for the gold coins that were established in “Three Coins in a Fuchsbau”. Nick suspects this man might also know who killed his parents.

There’s a Woman in Black who appears throughout the episode – she has kick-ass fighting skills and she’s played by Mary Elizabeth Mastrontonio (in a big coup). The big twist – she’s Nick’s mom.

While “Woman in Black” doesn’t let us know what’s happened to Juliette and adds the next mystery that Nick’s mother is still alive, there are many reasons to goose viewers back when the series returns in August.

It’s actually kind of exciting too, since the series has played coy with its mythology throughout Season 1 and now it feels like there may be a bigger dose of the mythology finally entering the series.

Juliette does wake up in her hospital bed – but it looks like she may be possessed or something. It could be interesting to see if Adalind has made Juliette into a Vessen (if that’s possible). More conflict for Nick would actually be good.

Still, in many ways, this cliffhanger episode isn’t enough. I guess TV series have gotten to the point where they pile on so much in that last episode of the season, this GRIMM episode is too evenly paced in comparison to expectations. Yes, it works, but, I guess they did do their job well because it’s making myself and the rest of the GRIMM fans wanting more – and now!

It will be interesting to see where GRIMM heads in Season 2, but hopefully the mythology stories will end up coming more to the forefront. All the Vessen species, characters and travails have been set up properly – now it’s time to let all hell let loose and really pay-off the premise for a kick-ass Season 2.