Exclusive Interview: GRIMM star Silas Weir Mitchell is not Blutbad to the bone 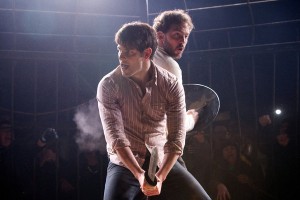 On NBC’s GRIMM, which has its first-season finale tonight at 9 PM, David Giuntoli plays Portland, Oregon police homicide detective Nick Burkhardt. In the opener of the series, created by Stephen Carpenter, David Greenwalt and Jim Kouf, Nick discovers that he is a Grimm, someone who can see the true nature of supernatural entities living among oblivious humans.

Nick’s initially reluctant guide to the world of the Wesen (pronounced “Vessen”), as the supernatural beings are called, is a Wiesen Blutbad named Eddie Monroe, played by Silas Weir Mitchell. Blutbads are the basis for werewolf myths, we are told, but Monroe is trying to clean up his lifestyle and his overall demeanor with yoga and vegetarianism. As the season has progressed, Nick and Monroe have progressed from wary associates to actual friends.

Mitchell, who hails from Philadelphia, often plays somewhat off-kilter characters. His 80 credits include Clint Eastwood’s FLAGS OF OUR FATHERS, recurring stints on PRISON BREAK and MY NAME IS EARL and a guest-star turn on DEXTER. However, Mitchell says that playing a Blutbad is a new experience.

ASSIGNMENT X: You’ve said when you were growing up, you were into SHOCK-HEADED PETER and those stories, the more modern fairy tales.

SILAS WEIR MITCHELL: I don’t know how modern – I think that stuff might go back – [laughs]. Certainly more modern than [the Brothers] Grimm. But yeah, that was a book that I had as a child that I was surprised at the violence of.

AX: When you were first cast as Monroe, did you know he was going to evolve into essentially Nick’s unofficial partner and friend?

AX: Would you describe Monroe as a werewolf?

MITCHELL: Blutbad is really what I would say, because it’s not the Big Bad Wolf, it’s not a werewolf, it’s more of a creature that is unique to this story.

AX: Have you played any nonhumans before this?

MITCHELL: I played a person who believed so deeply that he was a nonhuman that he sort of became a nonhuman but was not, which was on CROSSING JORDAN. I played a vampire, who you almost really believed that he was a vampire, but he wasn’t. He worked at a blood bank, and he got really into it, but in the end was really just a guy from Burbank.

AX: What do you differently playing a Blutbad, as opposed to a regular human?

MITCHELL: The thing about it, and what’s great about the show, is that it takes place in the real world, so I don’t do anything differently than anyone does, because I don’t want to scream at my dog. I don’t want to have a drink, I don’t want to [engage with] whatever the demons that we all share. So it’s not that different than playing someone who’s not necessarily turning into a werewolf, but might fly into a rage.

AX: When Monroe is in scenes with characters who are other types of Wesen, do you psych yourself up for, “Okay, I’d be dominant to this one and or submissive to that one”?

MITCHELL: Yeah. The first thing you do is, you go [based on] the writing. But as far as the dynamic goes, yeah. A Blutbad is going to rip an Eisbiber [a beaver-like Wesen] to shreds, if it comes to that. If I morph out on another kind of creature, there’s going to be another kind of dynamic, and sometimes the creature dynamic will infect the non-creature dynamic. That’s what’s interesting about it, is that Monroe is descended of a line that contains Charles Mansons and Hitlers, but Monroe is trying to keep his s*** together. And if you look at the Beaver family, their behavior trends in kind of an industrious, familial direction. So it does translate into the real world.

AX: Did you research any aspect of the character when you got this part?

MITCHELL: Yeah. I read books about werewolves. The werewolf is so deeply entrenched in human mythology that there was a lot of good stuff.

AX: You were also a regular on PRISON BREAK, playing Haywire, who was perhaps a little more out there than Monroe is, all things considered. Are there any similarities between the two characters?

MITCHELL: The only thing they have in common is they’re probably both outsiders.

AX: How would you describe Monroe’s relationship with David Giuntoli’s character, Nick Burkhardt the Grimm?

MITCHELL: I would say there’s an alliance between myself and the character of Nick, because he sees me for what I really am, which I’ve never [experienced] before, and I see him for what he really is, and he’s just learning who he is Yeah, I might know X, Y or Z [about other Wesen], but it’s more about people recognizing each other for what they really are.

AX: Does that create affinity or dread?

MITCHELL: Both. What I love about my character is the playing of both things. I am man and beast. I am in conflict with myself and conflict is drama, so when you’ve got an internal conflict, it’s a rich vein for an actor to work in.

AX: Did you feel that the episode “Of Mouse and Men,” where Monroe got the crap kicked out of him and then came back to Nick at the end and said –

AX: “I’m with you” – was that a big transition for Monroe?

AX: Was it helpful to you as an actor that Monroe coming to that decision seemed to be more about Monroe’s take about his own personal dignity than maybe his friendship with Nick?

MITCHELL: Well, I think it’s all linked together, because the opportunity comes as a result of working with Nick. Because Nick is trying to do good in the world. Cops try to help people. So it’s both. It involves Nick and it’s my own dignity. It’s neither one nor the other.

AX: Do you and David Giuntoli discuss how you’re going to play off each other before you do scenes/ or do you just jump in there?

MITCHELL: You play, you play. We don’t talk about it. We really enjoy working together. He’s a really good actor and a really smart guy and I feel very lucky that he’s someone that I get to play with, but we already know the rules of the game.

AX: How is it dealing with the Blutbad makeup?

MITCHELL: That can be a trial. There can be time in the [makeup] chair, for sure, but it’s not like Jim Carrey when he played the Grinch, covered from head to toe in green hair. It’s not that bad.

AX: How long does it take to get into the makeup?

MITCHELL: Four hours. You get up earlier than you would otherwise have to.

AX: You have a beard in real life, which is unusual for an actor who has to wear prosthetics even occasionally for a TV show. How they make you up around your facial hair?

MITCHELL: Yeah, but when they do the stuff, I only wear it here [indicates area starting at bottom of nose and going upward]. Because the Blutbad has a beard. So they apply more hair to the beard.

AX: Do you have to work at emoting through the prosthetics?

MITCHELL: No. The prosthetics are so good at this at this point, they’re built in such a way, that you have to maybe exaggerate a little bit here and there, but it’s not like a mask. It’s attached to your face in separate pieces, so your face is moving.

MITCHELL: No, I’d never been to Portland. I love it.

AX: Is it different than working here?

AX: LEVERAGE shoots in Portland as well. Are your productions crossing paths at all?

MITCHELL: [laughs] Yeah. We are. We have people on LEVERAGE, people on LEVERAGE have worked with us – yes, we see the LEVERAGE folks. One of the producers on LEVERAGE worked on a film [A FORK IN THE ROAD] that I did with Jim Kouf, one of the creators of GRIMM. I think that’s kind of how I wound up working on GRIMM was through Jim, and so there’s an overlap there.

AX: Are you looking forward to what looks like Monroe potentially having some romance?

MITCHELL: Yeah, I love that, I think that’s a really fun idea. I think people became very attached to Monroe as sort of a loner, and I think a wonderful evolution of that is to put him in the realm of someone who would make him not a loner any more. That’s growth and change, and that’s always interesting.

AX: When did you find out GRIMM had been picked up for a second season?

MITCHELL: We found out just [the first week in April]. It feels like longer ago.

AX: Anything you can tease about it?

AX: Anything else you’d like to say about GRIMM right now?