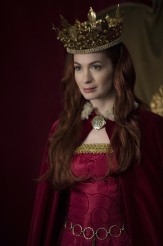 When the going gets tough, the tough get live-action role-playing in this entertaining episode 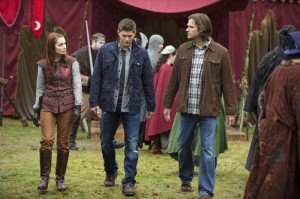 When SUPERNATURAL tries to do a lighthearted episode, it often gets too cute for its own good. The show also has had issues with guest and recurring female characters. However, when Felicia Day’s happily fannish lesbian hacker Charlie Bradbury was introduced last season, everything went right as she helped Sam (Jared Padalecki) and Dean (Jensen Ackles) battle evil Leviathan Dick Roman.

Dick, as we know, exploded (a moment of silence here for a worthy villain) and Charlie got the heck out of Dodge. In “LARP and the Real Girl,” Charlie is the last thing on Dean and Sam’s minds, especially as Sam is still depressed about giving up on a life with Amelia, and Dean can’t get him to cheer up. When Garth (off-screen, but part of the story via cell phone) sends them to investigate mysterious deaths in Hell, Michigan, the investigation leads the Winchesters to Moon Door, a Renaissance Faire-like live-action role-playing community that gathers on weekends. The reigning queen is … guess who.

Charlie is shocked to see the boys and they are stunned to see her. This time, however, Charlie decides to stay and fight for her kingdom, recreational though it may be. It turns out that one of Charlie’s fellow LARPers (Hank Harris) has gotten hold of a book of real magic and summoned a fairy (Tiffany DuPont), who is being forced to kill off the LARPers perceived enemies. Aided by Sam and Dean, Charlie destroys the book and frees the fairy, who takes her kidnapper back to the fairy realm for judgment. Sam decides it’s time to loosen up and have some fun after all, which at present entails joining the ranks of the queen’s army and LARPing.

This last allows for Ackles-as-Dean to deliver the big battle speech from BRAVEHEART, complete with long wig and face paint, to say nothing of ye olde Ren Faire-style costume he wears for most of the episode. At this point, “LARP” pretty much evaporates the fourth wall, so that the viewer is even more acutely aware of the tone of the whole episode. We can either go with the flow, accept the fact that “LARP” – once we’ve gotten through the opening murder investigation – is simply about everybody kicking back and having a good time, doing the kinds of things that couldn’t be done elsewhere (just how long has Ackles been saving up that soliloquy?), or we can be annoyed that the episode refuses to take itself seriously.

This reviewer is in the former camp. Day as Charlie is charming, and “LARP” will likely be even more appealing to fans of Day’s Web series THE GUILD (which is all about fantasy online gaming) and/or those with a familiarity with the world of LARP. It might be nice to see more balance between lightness and darkness of mood within a single episode, rather than have levity and grimness alternate from week to week, but in this case, a solid dose of playfulness is a good thing.