The actor talks Garth, plus his new series LEGIT 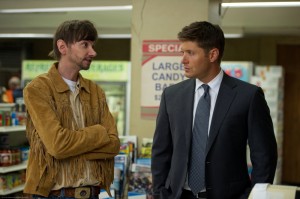 On SUPERNATURAL, Wednesdays at 9 PM on the CW and now in its eighth season, the Winchester brothers, Sam (Jared Padalecki) and Dean (Jensen Ackles), are demon hunters, part of a secret society who take their world-saving duties very seriously. However, their buddy Garth Fitzgerald IV, played by DJ Qualls, is a little more easygoing. Garth drinks, he picks up monster-hunter groupies, he likes to have a good time. And now he’s back in tonight’s episode, “Southern Comfort.”

Qualls is about to appear on FX’s dark comedy series LEGIT at the start of the new year. At six-foot-two and approximately 145 pounds, Qualls is cast as a lot of lanky, quirky guys, so Garth isn’t a big stretch for him. However, ask the Tennessee native about his work on SUPERNATURAL and his face lights up.

DJ QUALLS: It’s one of my favorite shows to moonlight on. Jared Padalecki’s a really good buddy of mine. And also they wrote the part for me, and that’s kind of an honor, when somebody calls you and says, “Hey, we wrote this for you. You probably are not going to do it.” And I read it and I was like, “No, this is funny, I’d love to do it.” And I’m having a great time. The fans on that show are insane [in a good way, as in off the hook].

ASSIGNMENT X: Have you done a SUPERNATURAL convention?

QUALLS: Yeah, I did one in Birmingham, England. And people just line up and hug you and cry. And I’m like, “I am so boring in real life! It’s really flattering, but you didn’t see me ten minutes before I got here. I’m a wreck.” They love it.

AX: Are you really boring in real life?

QUALLS: No. I wish I had a friend like me – I make myself laugh every single day. Actually, the other day, I was making myself laugh and I called Jim [Jefferies, Qualls’ costar in LEGIT] and said, “I need to make more friends.” 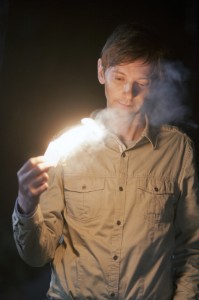 AX: You’ve said you got your start as a film actor by auditioning for a one-line role. What was the movie?

QUALLS: It was ROAD TRIP. It was in 2000, I believe. I went down to audition for a one-line part – the line was, “Two hundred and fifty dollars.” And Todd Phillips, who’s now gone on to do the HANGOVER movies and OLD SCHOOL, it was his first feature that he was directing. I was literally in a room with twenty dudes and he went down, one after the other, and we said, “Two hundred and fifty dollars.” And then they asked us to go outside, and the casting director came to get me in the lobby, and she was like, “Hey, so look, we want to talk to you.” So I came in, and [Phillips said], “We’re having a hard time casting this other character.” And it was a lead. And this is my first audition ever. And they never cast leads on location. So I was a little ignorant of how big of a deal it was, but something told me, “This is big.” It was so big, in fact, that I bombed the audition the next day and drove back to Nashville – it’s about a four-hour trip fromAtlanta, where the audition was – crying, thinking I’d just blown my chance. And then my air conditioner broke down in my 1987 or ’88Toyota Tercel with vinyl seats in August in the South. And I cried for four hours, all the way home. But fate stepped in, I got the part.

It was so quick. I’m certainly not complaining, but it literally went from, I was doing the movie, and six months later, I was on the TONIGHT SHOW. I [then did] seven or eight movies before I realized that people [in the audience] knew me, because I was literally going from set to set to set. I hadn’t really been in public. And I got depressed when it sunk in, because you get recognized – recognizability comes way before the money to be able to shield yourself from it. My phone number was listed in the phone book, and people were calling me at three in the morning, like, “Hey, are you the dude from ROAD TRIP?” And I was like, “Yes. Can you stop calling me?”

AX: Do you still live in Nashville?

QUALLS: No. I owned a house there for years, but about five years ago, I sold it, just because I was never there any more. Nothing shoots in L.A. – [LEGIT] is the first I’ve shot in L.A. for like seven years. I was living in New Orleans the last year, I was doing a TV show [MEMPHIS BEAT], but you have to be here [inLos Angeles] to get the job. My car is ten years old, it has forty thousand miles on it.

AX: In LEGIT, your character Billy is quadriplegic. Is it hard holding that still in your scenes?

QUALLS: It’s really hard. That’s a reason why I almost turned this show down, because I was like, “First of all, how could I ever drive action? How could I ever drive any scene?” And also, just so [physically] limited. [As Billy], I really can only move two fingers on each hand and my neck. But it’s actually making me feel like a good actor. It really is – it’s teaching me how to be a good actor, because the physicality I’ve always relied on, it’s my bag of tricks. Every actor has this bag of tricks they have, and if you actually watch them in enough things, you’ll say, “Oh, I’ve seen you do that before or this before.” So my bag of tricks has gone completely out the window and I’m just left kind of naked. In the pilot, I actually am naked.

AX: How is it working for FX?

QUALLS: Awesome. I think this is the right network for me. For my sensibilities, who I am in real life – [LEGIT] is the first piece of work that I’ve been able to do [that] is closest to my sense of humor. That sort of dry, a little bit over the top, but just deadpan and it is sort of what it is, no apologies.