The return of Castiel, Crowley and Kevin - oh, my! - in a decent arc episode 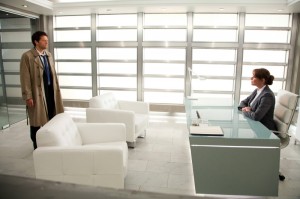 Castiel (Misha Collins) is back on SUPERNATURAL. Naturally, instead of rejoicing, Dean (Jensen Ackles) is filled with suspicion – how the hell did Cass get out of Purgatory? – and guilt, because Dean didn’t get Cass out of Purgatory himself.

This happens in the midst of Sam (Jared Padalecki) and Dean trying to track down the connection between seven people who have vanished in the midst of brief, freak natural disasters. Then they are contacted by the Mrs. Tran (Lauren Tom), mother of the missing Prophet of the Lord Kevin (Osric Chao). Mrs. Tran and Kevin had been doing a good job of hiding from demons, until Mrs. Tran unwisely hired a witch (Cyrina Fiallo) off the Internet to help make anti-demon bombs, and the witch double-crossed them. This allowed Lord of Hell Crowley (Mark A. Sheppard) to grab Kevin.

Meanwhile, Castiel is whisked away to another dimension where he meets Naomi (Amanda Tapping), who informs him that she pulled him out of Purgatory and he’s now going to periodically be summoned to tell her all about the Winchesters – and that he won’t remember any of it. Then Cass is whisked back to Sam and Dean. Cass finally gets Dean to remember that Cass simply let go of Dean’s hand when Dean tried to pull him out of Purgatory, rather than (as Dean has been remembering it) that Dean failed to hold on tightly enough.

First, kudos to actress Tom. Mrs. Tran is a wonderful, surprising character, capable of being ass-kicking, overly maternal, driven and yet oblivious on occasion. The actress juggles all of these qualities and brings them into a whole person of the kind we seldom see on any sort of TV, let alone genre drama. Props to the writers as well for crafting a character who is funny yet can credibly survive in the SUPERNATURAL universe – and who won’t prompt complaints of “Mary Sue.”

It’s good to have Castiel back, if simply to provide an alternative sounding board for the Winchesters. However, the emotional tension between Dean and Cass, at least on Dean’s side, is so intense that it seems a bit much for the situation. people tune in to see either Dean or Sam feel guilty, so Dean is going to beat himself up, whether it makes sense or not. In this instance, grief might be appropriate, but not this kind of self-castigation.

No wonder Castiel is surprised to find Dean blames himself for Cass getting stuck back there – Dean’s memory of events is slightly different than what happened, but we see that Dean didn’t bail on Castiel, and the change in perspective is simply a matter of when, not whether, Castiel gave up during the escape from Purgatory. Castiel also feels guilty, but in his case, he’s got so much blood on his hands from his attempted takeover of Heaven that it seems warranted.

It’s just ever so slightly questionable that Dean has been flipping out this much about Castiel getting left behind while Sam seems absolutely at peace with not searching for Dean. Then again, the sentiments between Dean and Castiel have ratcheted up to a level where it’s no wonder SUPERNATURAL ranks high on AfterElton.com’s list of shows with male/male romantic subtext.

There seems to be a continuity glitch – Dean has gone on at some length about how Castiel was “different” in Purgatory. We’re still waiting to find out how, since what we’ve seen so far seems in keeping with what we already know. Come to that, Castiel has gone through so many changes in attitude that even Crowley remarks on it – at this point, Castiel would have to be very strange indeed not to mesh with some persona he’s had at some point.

On the pro-continuity front, it’s nice to hear someone finally bring up the prophet Chuck, though Castiel says no one knows exactly what happened to him. Well, the audience knows he vanished after typing “The End” at the end of Season 5, so although Castiel surmises that Kevin being a Prophet means Chuck must be dead (there can be only one at a time), we’re not so sure. It would be fun to see Rob Benedict back as Chuck, and interesting to hear exactly what that bodily disappearance was all about.

Sheppard, as ever, is entertainingly dapper and urbane as Crowley, and Chao is a highly likable young hero. Naomi is intriguingly intimidating, and casting geek idol Tapping (of both STARGATE and SANCTUARY) gives the character instant added gravity.

In short, “A Little Slice of Kevin” provides good company and plenty of patented SUPERNATURAL angst.