Exclusive Interview: Harold Perrineau gets dark on SONS OF ANARCHY

The LOST alumnus talks about his villainous new gig 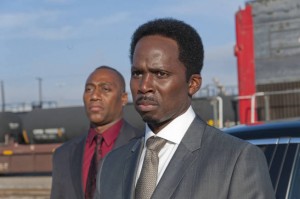 Harold Perrineau is no stranger to dark-souled characters, having played the seriously conflicted Michael Dawson on LOST and prison inmate Augustus Hill in OZ. However, Damon Pope, the Season Five villain in SONS OF ANARCHY (FX, Tuesdays at 10 PM), may be his darkest role yet.

As series creator Kurt Sutter says, “I wanted an actor who … you would believe in a suit and tie standing in front of a city council meeting, at the same time he’s somebody that had the depth and the ability to turn dark and to do some of the heinous things that he does in the first couple of episodes. To me, there are a handful of actors who can pull that off, and clearly Harold is one of them, and we were really lucky to get him.”

Perrineau thanks Sutter for the praise and offers, “When I got the part, I was a little concerned about it myself – can I pull that off? Then I thought about it a little more, and I think it’s the thing that I pulled off in my life if I consider my background, and then the person that you see here today, there’s not a lot of difference internally between that character and Damon Pope’s character, My mom passed away a couple of years ago, and one of my cousins said to me, ‘I’m just so glad you made it. I was really scared you would die before you ever became a teenager.’

She just didn’t think I was tough enough to make it out of there. So there were really extreme circumstances, and you have to be able to think more creatively, be really smart, be agile, be broken, be strong, all those thins. And I think all those things are exactly the same things that Damon Pope had to/has to deal with. So it’s just me, the actor, looking for a way into the character that feels really real to me. So I thought it would be a really interesting opportunity to work on a really, really great show.”

ASSIGNMENT X: Are you happy to be on a show where you know where you are and what’s going on?

HAROLD PERRINEAU: [laughs] I’m happy to be on a show where I know where I am. What’s going on is always a question no matter what show you go onto. I have more of an idea than I did on LOST, for sure. Yes, I am really happy. I’ve been really lucky. I’ve gotten to work with some amazing writers and show creators, so I feel like this is another one of those opportunities to get to just work with some extremely smart, creative writers and writing staff and like I said, I show up and it’s something really creative and fun to do.

PERRINEAU: I’d seen it a couple of times before, and there were a couple that I saw it and some of the violence affected me really quickly, like it did when I was in OZ, many, many years ago. And so I kind of pushed it away, because sometimes it’s hard to revisit living in that kind of violence. And then right before I got the job, I was inIndia, and it was playing all the time, so I started re-watching it, and then oddly enough, I came back and there was this opportunity to do the show, so I have become a fan again. I’m a fan of all the other things that are in the show, other than the violence, that feel of Shakespeare that was happening there, and I was like, “Wow, this is a really great show.” And so when I got to be a part of it, I was really happy.

PERRINEAU: Yes. Somebody who’s on his own – the things that they are trying to deal with really are just their own survival. When you’re the leader of a gang, like the leader of a business, like the leader of an army, you have responsibilities to a lot more than just yourself, so considering how the character thinks and what they do, it’s a different kind of consideration.

AX: Do you have to exert any authority over the other actors around you?

PERRINEAU: No. I think that’s one of those great things that’s in the writing. I don’t have to exert it, it’s there. And I don’t know if it shows up with me or they do it, but it’s already there. I don’t have to do it at all. You have to believe in it.

AX: Is that something you already know how to do?

PERRINEAU: I do indeed. In fact, I ride a really fast bike, and these guys all ride really good Harleys, and I thought about just coming in just to be annoying on my super-fast ride, my sports bike, just to see if I can make them all really annoyed [laughs]. But I haven’t done it just yet.

AX: Paris Barclay is one of the directors/executive producers on SONS. Have you worked with him before?

PERRINEAU: Oh, yeah. I have a ton of things coming up. I have on TBS [the new series] THE WEDDING BAND, which is super-funny, completely different from this, and then Kathryn Bigelow’s new movie ZERO DARK THIRTY.

AX: And how is shooting in Tujunga, which doubles for the fictional town of Charming in SONS?

PERRINEAU: I’m just learning all the different places in L.A. They tell me to show up and then I show up. It’s actually pretty cool. It’s interesting how desolate it is. I’ve been wanting to go exploring around there. I haven’t yet. I don’t want to get myself in too much trouble yet.