The actress discusses playing Gemma on the popular FX series 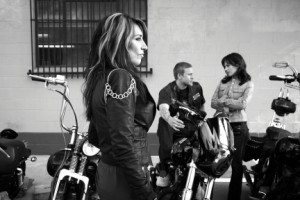 In SONS OF ANARCHY, now in its fifth season on FX on Tuesdays at 10 PM, nobody has it easy. In creator/executive producer Kurt Sutter’s drama about the members of a motorcycle gang and its members, characters have been beaten, raped, robbed, stabbed, shot, betrayed and murdered.

However, arguably nobody still living has been put through more than Katey Sagal’s character Gemma Teller Morrow. Gemma has survived the death of her first husband, only to learn that her second, Clay Morrow (Ron Perlman), was responsible for the crime and then beat the hell out of her, but now wants her back. She has also been estranged on and off from her son Jax (Charlie Hunnam) and his wife Tara (Maggie Siff).

Sagal is also involved in relatively lighter fare as the voice of Leela of seven seasons (so far) of the animated FUTURAMA, now on Comedy Central.

The actress (who in real life is married to SONS creator Sutter) takes some time to talk about both series after a Television Critics Association press event for SONS OF ANARCHY.

ASSIGNMENT X: Do you have a favorite aspect of what Gemma has gone through? Although “favorite” may be the wrong word, all things considered …

KATEY SAGAL: Well, I can sort of track her. I think that she’s got a very definitive arc, actually. Clearly her motivation is all about family and loyalty and keeping her lifestyle together. And she was doing that all along, even through her mishaps in Season 2, even through going toIreland – her intention is always clear. And then by last season, we saw her core start to crumble a little with her distrust of her husband and him lying to her one too many times, and finally the beat-down. So now where we see her is falling apart, basically. She’s more off-center now than she ever has been. [At the start of Season 5], she’s alienated from her grandkids and Jax is being weird,Tara’s pushing her away, she doesn’t want to be with Clay. She does have Jimmy Smits [as Gemma’s new lover Nero Padilla], which is a nice consolation, but it’s weird for her. 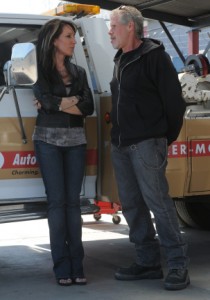 AX: What aspect of the arc so far has been the most exciting as an actress?

SAGAL: Well, everything so far, because to play such a woman that has always really been in control and been in charge, suddenly waking up and not knowing where she is – she can still think fast, that’s her deal. She’s a survivalist, really. But I think the most challenging is being that vulnerable, to have her take that turn of vulnerability.

AX: How is FUTURAMA going?

AX: Do you go back and forth between working on SONS and FUTURAMA, or are they in production at two entirely different time periods during your work year?

SAGAL: Oh, no. In fact, I feel so bad, because [the FUTURAMA producers are] always trying to schedule me to come in, and they’re very lenient with me about my schedule, because I’m working so much on SONS this season, so I find my little times to go in and be with them, but they’ve been great. They’re very tolerant of my schedule.

AX: How is it working with the young people who play Gemma’s grandkids?

SAGAL: On the show? Some days, it’s great, some days, they’re just being kids. It’s a hard thing to bring a kid and have them do a certain thing. We do the best we can with them.

AX: Anything else you’d like about to say about SONS OF ANARCHY?

SAGAL: Season 5 is awesome. It’s kind of a reboot of the show in terms of the leadership and what’s happening to everybody and it’s really great.