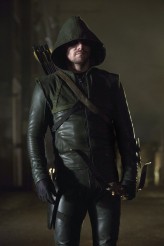 Oliver suspects one of Diggle’s old Army buddies is involved in a string of armored car robberies, and tensions between the two of them rise. 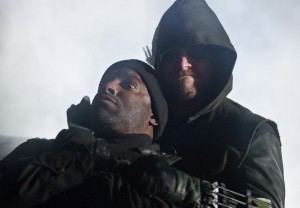 After meandering a bit with last week’s episode, “Trust but Verify” gets ARROW back on track in a big way with a taught, filler-free episode that juggles four satisfying storylines with remarkable agility.

The main story concerns a gang of criminals on a deadly armored car robbery spree.  This, quite reasonably, attracts the attention of Oliver Queen, (Stephen Amell), and John Diggle, (David Ramsey), who, as vigilantes (costumed and otherwise) protecting Starling City, tend to frown on such activities.  The catch in this scenario is that Oliver surmises that the leader of the robbery crew is Ted Gaynor, (Ben Browder), Diggle’s superior officer from his soldier days in Afghanistan.  Diggle doesn’t think his old friend would be involved in a criminal enterprise, but Gaynor’s name appears on Oliver’s list, and Oliver’s opinion on this matter is predictably rather inflexible.  The two men argue and decide upon different approaches to getting to the bottom of this mystery, and those approaches come into conflict almost immediately.

The best part of this main storyline is that it generates two pretty solid action sequences related to the armored car robberies, and takes this week’s fight scenes out into the streets instead of leaving them in the soundstage, where they’re usually quite underwhelming.  In my opinion, watching tense heist sequences where guys in ski masks shoot grenade launchers at moving vehicles is always better than watching obvious stunt doubles in goofy costumes doing uninspired martial arts in a wide shot.   The prevalence of more inventive, less cartoony, action sequences has been a positive development for ARROW in the second half of its first season, so I applaud the armored car robbery plot. And this storyline also works because it serves to answer the question of how reliable an indicator of one’s character it is to appear as a name on Oliver’s list.  (Answer:  Very reliable.  In the world of ARROW, if you’re on the list, you’re bad).

Also in this episode, Tommy Merlyn (Colin Donnell), is contacted out of the blue by his now-estranged father Malcolm (John Barrowman), who apparently wants to bury the hatchet after saying cruel things to Tommy and cutting him off from the family coffers.  Malcolm offers a dinner invitation as an olive branch.  Since we know Malcolm is also the criminal mastermind who’s been behind nearly every bad thing that’s happened in ARROW to date, including the recent abduction of Oliver’s stepfather Walter Steele (Colin Salmon), we’re obviously not inclined to believe that any hatchets will actually be buried.  And – Surprise!  They’re not.  At dinner with Tommy and his new girlfriend Laurel Lance (Katie Cassidy), Malcolm reveals his true ulterior motive.  He wants Tommy to sign off a paper that will close his late mother’s free clinic in “The Glades,” (apparently Starling City’s roughest neighborhood).  This enrages Tommy, and gives a glimpse of Malcolm’s ugly worldview.  Malcolm explains to Laurel that the world is a cold, unforgiving place, with no room for such sentimentalities as a free clinic for the poor.  The brutal murder of Tommy’s mother decades earlier apparently planted the seed for this kind of thinking into Malcolm’s head, and he’s really let his misanthropy blossom since then.

Malcolm Merlyn’s duplicity also figures into a subplot in the Queen household.   Oliver’s sister Thea (Willa Holland), while prepping for her eighteenth birthday party, discovers her mother, Moira (Susanna Thompson) taking mysterious phone calls from Malcolm, and altering their shopping plans to go meet with him in the middle of the day.  Thea sees this as evidence that Moira and Malcolm are involved in an affair, and that this is a resumption of an illicit relationship that was also going on back when Oliver and his late father disappeared five years prior.  This is the first glimpse any of her children have been given of Moira’s shady activities, (which actually involve being a conspirator with Malcolm in a wide array of crimes, though not actually having an affair with him). The partial discovery of Moira’s secret life is a provocative development.  Thea doesn’t hesitate to tell Oliver of her suspicions about their Mom, but it looks as though the thought of her sneaking around with Malcolm isn’t enough to raise Oliver’s hackles, at least yet.

The other story that “Trust but Verify” handles skillfully is this week’s flashback to Oliver’s time on the island.  Last week, Younger Oliver had just escaped from the clutches of Edward Fyres (Sebastian Dunn), but his mentor/protector Yao Fei, (Byron Mann), was not so lucky.  This week, Oliver bravely tries to infiltrate Fyres’ prison camp while incognito to free his friend, and we get to see a few tense moments when it appears he’s on the cusp of being discovered.  The twist at the end of this sequence does a nice job of deepening the mystery of the island, and what Fyres’ role actually is there, as well.

“Trust but Verify” moved ARROW’s plot along so much, or at least so much more than usual, on so many fronts, that even though I gave it credit for cramming all this stuff into a single episode, I actually wanted it to slow down a bit.  Maybe it’s a hangover from LOST, but when a TV show has a central mystery that involves discovering the purpose of an island I get nervous that maybe it’s all going to be a huge disappointment at the end, and I shouldn’t be in too big a hurry for the big reveal.  But if all of ARROW’s future fast moving episodes are as effective as “Trust but Verify,” it’s certainly possible that that’s something I won’t need to worry about.