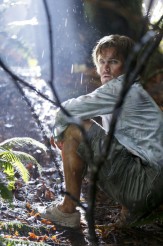 Oliver Queen must face up to his fears and resume his vigilante career in time to stop a crazed killer who targets Starling City’s firemen. 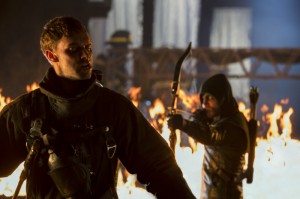 When we last left ARROW at its midseason break, Oliver Queen (Stephen Amell) had just found himself on the receiving end of a brutal beat-down at the hands of a mystery villain in another hooded archer costume, and Oliver’s stepfather, Walter Steele (Colin Salmon) had just been abducted by the cronies of Malcolm Merlyn (John Barrowman), who, not coincidentally, was also revealed to be the mystery villain in the hooded archer costume.

“Burned” does not follow up on any of this, plot-wise, but does spend time detailing all the emotional blockages that these two events left in their wake.  Oliver has healed from his physical injuries, but he’s unwilling to put the costume and quiver back on and fight crime.  His near death experience earlier has left him feeling an unprecedented fear – not for his own life, but of what would happen to those closest to him if he were to be killed while taking on the city’s criminals.  Meanwhile, Oliver’s mother, Moira Queen (Susanna Thompson), also spends the episode brooding while in self-imposed exile in the Queen mansion, unwilling to go to work and take over her missing husbands duties, even though the company desperately requires her presence.

(Spoiler Alert: Don’t fret; they both snap out of it by the end of the episode).

The plot of “Burned” centers on a madman who’s viciously slaying Firemen by dousing them with turpentine while they fight fires and watching them to burn to death.  While wrestling with his crisis of confidence, Oliver debates letting the police handle the fireman slayer, but Diggle (David Ramsey) ultimately convinces him that this is a reign of terror that only he (as the hooded vigilante) can end.  Neither the discovery of the identity of the fireman killer, nor his motivations, give us anything particularly ground-breaking dramatically, but this storyline serves as a good excuse to have a lot of fire effects in the background of ARROW’s fight scenes this week, which makes them more visually interesting than its usual dark warehouse karate jump-arounds.

“Burned” gives us another round of flashbacks to Oliver’s time fighting for his life on the island, but there really isn’t much to them, and they only serve to illustrate a time in Oliver’s life when he was terrified for his survival in order to mirror his current state of inhibition.  They don’t advance our understanding of what happened to Oliver’s mysterious island benefactor Yao Fei, (Byron Mann), or delve into whether he’s really a good guy or a bad guy, (a question ARROW had teased us with at the midseason break).

The only major new development in “Burned” is that the worm appears to be turning vis-à-vis Starling City’s perception of the hooded vigilante.  A local News Anchor has begun filing reports detailing the reduction in crime associated with Oliver’s reign as the hooded vigilante, and she describes his actions in saving innocents from the nightclub fire that constitutes the finale of “Burned” as those of a hero.  My hope is that once Oliver makes the switch from vigilante to super hero in the public’s eye over the next several episodes, this News Anchor will finally assign his vigilante character a moniker that’s less awkward for me to keep writing than “the hooded vigilante.” At some point he just has to be referred to as “Arrow,” right?