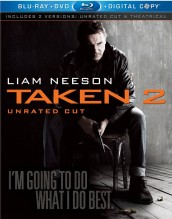 TAKEN 2 Highlights this week in Blu-ray and DVD Releases 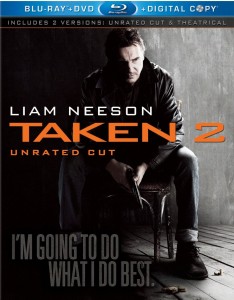 TAKEN 2 – I am a huge fan of the original TAKEN. Liam Neeson is great in the role as an ex-CIA agent turned hired protection muscle that must do everything in his power to rescue his daughter from the white slave trade. It was brutal and action packed but had a nice backdrop of fatherly protection. TAKEN 2 while it shines at times, seems to miss the mark in terms of recapturing some of the same feelings and tones of the first one. Granted, there are still some fun moments with Neeson once again straight up kicking some ass and Maggie Grace (who looks just amazing here) also does a good job as the once-taken daughter now a bit harder and a bit willing to do what’s necessary to protect her mother and father.

But again, the problem is that we have already seen this scenario and are used to what to expect. At no times do we not believe that Neeson is going to get free once he is taken or that he will again wipe out the entire line of bad guys that have done the dastardly deed. Also the pursuit aspect of TAKEN 2 is neglected. The first film had plenty of moments where Neeson’s character had to investigate or torture or manipulate officials into finding out clues to where his daughter was taken. There is really none of that here and it really is missing. Still, fans of the first film and action movies in general will enjoy it and even more so in Blu-ray as it brings it life that much more. 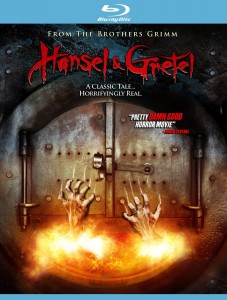 HANSEL & GRETEL – There are a slew of modern takes on classic fairytale movies coming out in 2013. Not sure why all of the sudden this has become its own cottage industry especially with the so-so SNOW WHITE AND THE HUNTSMAN but it is indeed an interesting development in cinema. Also, goes to show there are no new ideas in Hollywood after poaching everything they could from video games and comic books. This version comes out before the big budget HANSEL AND GRETEL: WITCH HUNTERS and from B-movie pioneers The Asylum. The good news is that this HANSEL & GRETEL is actually worth your time because it has a lot going for it. For starters, there is a lot of gore and crazy sh** going on that half the time you would have thought this was a TEXAS CHAINSAW MASSACRE type film. Second, Dee Wallace, who plays the flesh hungry witch on one hand and an innocent grandma type on another, is simply brilliant and just a lot of fun to watch as she simply owns every scene she is in. While it isn’t going to win any awards for production values or special effects (although what is here is more than serviceable), it is certainly one of the better The Asylum films you will see. 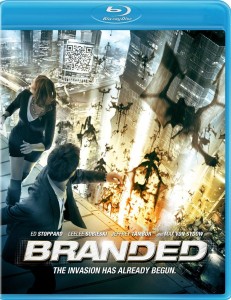 BRANDED – Don’t be fooled by the cover of this film that alludes to some alien invasion or science fiction flick. It isn’t. Instead it is a modern take on how the brands that encompass our lives impact our selling and buying decisions. A major marketing rep struggling to come up with proper campaigns for his clients suddenly gets the ability to see past our own normal vision and see how corporate brand marketing impacts our brains. So he uses this new-found power to wage brand war against the brands he wants out of business ending with a slew of CGI crazy brand beasts fighting it out in a surreal plane of existence. It’s ok for what it is but again don’t expect an alien invasion or cool sci-fi film. 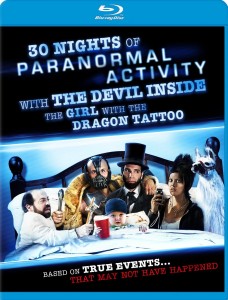 30 NIGHT OF PARANORMAL ACTIVITY WITH THE DEVIL INSIDE THE GIRL WITH THE DRAGON TATTOO – Another parody of a slew of horror movies that have come out in the recent months and years. This one is more another PARANORMAL ACTIVITY parody than anything else but tries to work in as much as the other movies as it possibly can. It is what it is. You obviously have an idea about what you are getting into when you rent something like this and it pretty much follows as you would expect with some gross moments here or there and some WTF moments as well. The comedy is few and far between, however, unless you really love this type of stuff. 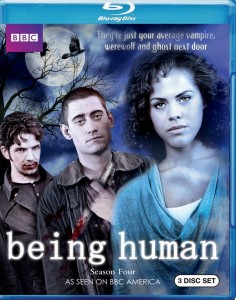 BEING HUMAN: SEASON 4 – The original BBC version of BEING HUMAN continues to outshine that of the SyFy Channel and not just because of the über hot Lenora Crichlow but because it doesn’t shy away from taking some big steps to more the series forward. For example, the killing of Mitchell in the last season evokes a slew of changes in the show including a fast forward to the future where a werewolf baby has become the center of a new war between vampires and werewolves and it has huge consequences for other characters in the show. This brings a whole host of new characters onto the show making the entire series almost new in terms of where it was in the prior season. Shows that the producers of the show are willing to shake things up tremendously in order to further a good storyline. 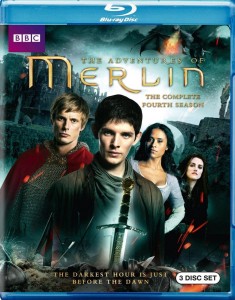 MERLIN: THE COMPLETE FOURTH SEASON – The cool thing about the BBC series MERLIN is that it doesn’t pull any punches. From the get-go, the fourth season is a much darker and brutal season and you have a feeling that a lot of the characters are not going to last the entire season. During the season, Morgana plots, plans and attacks Camelot, Arthur, Merlin and the knights with a series of nasty beasts and crazy spells that culminates in a blow-out season finale where the knights must protect Camelot alone without the help of their magician or king. As the final season of the show has already aired, no doubt BBC America will be airing the new episodes soon and then the final season will be released on DVD. But for now check out what you missed in the fourth season and you won’t be sorry.