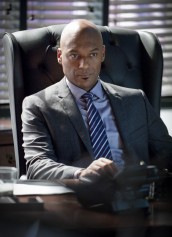 As Christmas comes to Starling City, Oliver must face the threat of a new, arrow-shooting vigilante

I was worried when “Year’s End” began with Oliver Queen (Stephen Amell) spending most of the first quarter of the episode asking his family members why they stopped celebrating Christmas after he and his father were lost at sea and presumed dead.  I was worried because A) the answer was bleeding obvious, (family gatherings were suddenly kind of a bummer), and B) I was afraid we were going to get a syrupy “True Meaning of Christmas” themed episode that ended with a Hallmark-card moment of the Queen family standing around a 10-foot blue spruce and toasting with eggnog.  In fact, however, “Year’s End” turned out to be ARROW’s most action-packed episode yet, and it leaves the series in a nicely dark place as it heads into its midseason break.

The action this week comes in the form of mysterious new vigilante who wears a darker version of the hooded costume Oliver wears, and is apparently just as much of an archery enthusiast.  This vigilante executes several of the criminals from “The List,” who Oliver had already paid a visit to.  While Oliver’s tactic is to intimidate list-dwellers into turning themselves in to the police, or giving back their stolen money, the new archer simply kills them with an arrow to the chest.  Thanks to the investigative prowess of Detective Quentin Lance (Paul Blackthorne), the police are quickly made aware that this second archer is a copycat, but the Police Commissioner (Robert Moloney) doesn’t seem to care, and wants Det. Lance to arrest whichever vigilante is most convenient.  Lance doesn’t care for this, lets the Commissioner know it, and is promptly tossed off the case.  It’s lucky for Oliver that he chooses this time, while incognito as the hooded vigilante, to reach out to Det. Lance for help in locating the new archer.  A suddenly frustrated Det. Lance is now in the mood to offer up some evidence to help Oliver find the bad guy.

After that, ARROW keeps the action coming at a fast and furious pace this week.  Aside from the two executions of criminals, there’s a much-needed scene where Oliver follows the trail of evidence to the new archer vigilante, only to find his destination contains a booby trap and there’s a bomb set to blow up the building.  The extra money that went into ARROW’s explosion budget this week was well spent, because the scene is tense and looks pretty cool, with Oliver using an explosive arrow to free himself and jump to safety, only one brief step ahead of the fireball.

Also we get another round of flashbacks to the island where Oliver had been held prisoner, which brings more action, and also more information about the island and its purpose, (although, in a nice touch, by the climax of “Year’s End” it’s not clear that the information we were given is actually true).  Edward Fyres, (Sebastian Dunn), and his scary goon Deathstroke, (Jeffrey C. Robinson) return to torment castaway Oliver, (still recovering from torture at their hands earlier), and they capture Oliver’s enigmatic benefactor Yao Fei, (Byron Mann).

I was concerned that ARROW was going to bring these characters ahead in the timeline by placing them in present day Starling City to torment Oliver again, but that doesn’t happen in “Year’s End”, and I think it’s a wise choice.  It’s good for Oliver to have a real antagonist (Fyres) in the Island timeline as well as a different one (in the form of this new archer vigilante), in the present day, and give the audience more time to speculate what, if any, connection exists between the two.  I was pleased with the arrival of the new archer vigilante, and the reveal that he is, in fact, Malcolm Merlyn (John Barrowman), who also spends his time antagonizing Oliver’s mom, Moira Queen (Susanna Thompson) when he’s dressed in civvies.  Malcolm Merlyn, and his newly established archery skills, gives ARROW a strong, recurring villain, which this series has badly needed since the beginning.   I also like that Malcolm has the same exact skill-set and outfit as both Yao Fei and Oliver, and seems to know all about what the island was and why Oliver wound up there, which suggests that there’s a deeper explanation for why this “Robin Hood” leitmotif is so prevalent in the world of the show.

Some other things I really liked about “Year’s End”:

I was a little less pleased about the way ARROW hasn’t quite sold me on Oliver’s skills behind the keyboard.  For a guy who was trapped on an island without modern conveniences for five-years, (a lifetime when we’re talking about keeping up with the advancement of technology these days), we’ve seen him set up a high-tech computer system for himself in his secret lair, and in previous episodes he knew how to use it expertly to find out essentially anything he wanted to bolster his vigilante career. “Year’s End” finds him, out of costume, taking a black arrow that’s been illegally removed from a police evidence locker to Felicity Smoak (Emily Bett Rickards), in order to have her get on her computer and find out where it was manufactured.  Obviously ARROW wants us to spend more time with Felicity Smoak, (not unreasonably, since she’s charming and brings some decent comic relief to the proceedings), but I’ll buy Walter Steele (Colin Salmon), using her as his personal private detective, not Oliver, who supposedly can do this stuff himself.

“Year’s End” concludes with Malcolm Merlyn kidnapping Walter and taking him to parts unknown, while promising to Moira that he’ll be returned unharmed at a later date, (which seems wildly unlikely, given what we now know about Malcolm Merlyn).  We also learn that Moira was complicit (although reluctantly) in Oliver’s original abduction and torture, and that something similar might be in store for Walter.  And we get a scene in the hospital between Oliver, (recovering from injuries sustained fighting the new archer vigilante), and his sister Thea. (Willa Holland), which comes about as close as possible to my much-feared Hallmark card ending, where the two siblings resolve to stop reliving the pain of the past and just accept each other for who they are now.  That isn’t the true meaning of Christmas as far as I know, but it’s a nice sentiment for a show about people paying emotionally for the sins of their parents, and as a fitting end note to a strong first half of ARROW’s debut season, I certainly won’t argue with it.