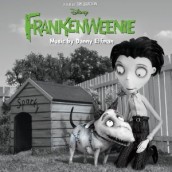 Tim Burton and his muse Danny Elfman keep doing their darndest to give life to the genie in a stop-motion bottle that was THE NIGHTMARE BEFORE CHRISTMAS, first assembling the body pieces of THE CORPSE BRIDE, and now the doggie bits that comprise FRANKENWEENIE. And even if the public can’t quite seem to get Jack Skellington out of their minds, or ears, it doesn’t mean that this gleefully demonic duo isn’t applying a different shot of energy each time at winged bat (or winged cat-bat demon in this film’s case).

Where BRIDE mainly drew life from the comedic opera stylings of Gilbert and Sullivan, FRANKENWEENIE finds inspiration in the warped suburban wonderland of EDWARD SCISSORHANDS by way of the 50′s sci-fi shtick of MARS ATTACKS, all while jigging the pieces about into a new creation, fueled by equal parts heart and mock terror. Sure there’s the Elfman horror pastiche that also filled this summer’s DARK SHADOWS with Burton.

But what truly distinguishes FRANKENWEENIE is that its protagonists are stop motion kids. Subsequently, Elfman’s stormy menace is inflected with an adolescent’s sense of wonder, hearing the act of unholy creation as done out of love for a pet instead of spite against God- something that was the undoing of an older guy named Victor Frankenstein. All this monster wants to do is lick you, making FRANKENWEENIE veer between terrifyingly humorous orchestrations and the kind of bell-filled sentimentality that would befit a guy stuck with sharp appendages.

FRANKENWEENIE is always in hyperactive cartoon mode, flurrying about like Carl Stalling in a Franz Waxman BRIDE OF FRANKENSTEIN mood. We also get a1930’s black and white orchestra, along with a wacked 50′s Theremin that at times makes FRANKENWEENIE seem like the steroid soundtrack for the Ed Wood monster picture that Elfman always wanted to score. But in the end, it’s the swellingly magical choral and string sweetness of a little boy and his dog that sticks with you along with a truly genius horror-ification of Disney’s opening signature tune of “When You Wish Upon A Star” – easily the coolest bit of studio logo music subversion since Elliot Goldenthal turned Alfred Newman’s Fox fanfare to dissonance for ALIEN 3.