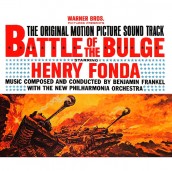 Perseverance Records is on a roll re-issuing the original LP-programming of such Warner Brothers titles as CAPRICORN ONE, THE EXORCIST and THE WITCHES OF EASTWICK, their distribution now having grown to encompass Europe (excepting the U.K.) to allow fans to get their hands on these formerly hard to find titles. But if there’s one catalogue soundtrack just might have the most meaning for that continent, then it’s Benjamin Frankel’s 1965 score to BATTLE OF THE BULGE.

One of the 60s biggest WW2 spectaculars, BULGE chronicled the Allies’ desperately fought battle to suppress a German tank offensive in Belgium, one that could have changed the course of history. When it came to that cinematically fictionalized fight, none of our boys could have a bigger weapon to overcome the Jerries than an English composer at their side, a la William Walton, Roy Budd or John Addison (THE BATTLE OF BRITAIN, A BRIDGE TOO FAR).

Perhaps it was because many of these musicians had gone through the blitz themselves, but you could always count on their scores to have a patriotically rousing, never-say-die vigor to them. But what takes BULGE beyond that given quality is the sheer musical barbarity of the battle. A disciple of Arthur Schoenberg’s “twelve tone” technique, and with no small amount of “serious” concert music to his credit (including an ode to The Holocaust’s six million victims) Frankel’s BULGE is surprisingly modernistic for a soundtrack of type.

Easily the biggest score the composer got in a prolific career that included THE CURSE OF THE WEREWOLF and NIGHT OF THE IGUANA, Frankel would never again get a score that offered the scope of BATTLE OF THE BULGE. And it’s perhaps that hindsight that had Frankel pour a kitchen sink of blazing notes into this dynamically stirring score. Of course Frankel has the proud military percussion and stirring themes, but as blown into a savage, constantly changing frenzy of barbaric, dance-like rhythms that doesn’t so much suggest a traditional war score as it does a staging of Stravinsky’s “The Rites of Spring.” And with the Germans on the sneak attack offensive, there’s a chilling sense of Teutonic confidence to the score, from the Panzer Corps anthem to the slurred use of horns. Frankel is almost an enemy agent in how well he captures the Nazi’s sense of elation and confidence at their seeming surprise, while use tolling bells, pounding drums and an elegiac trumpet to reflect the atrocity of their massacre of American soldiers.

Rarely has WW2 been both so impressionistically, and impressively fought by a composer as Frankel did for BATTLE OF THE BULGE, a soundtrack that just might be Perseverance’s leader of the WEA re-issue pack, with even Frankel’s stepson E.D. Kennaway on the Allied side to report with appreciative liner notes for the unsung composer’s most explosive score.

Click on Link: To Purchase BATTLE OF THE BULGE soundtrack