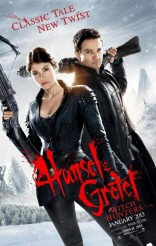 A movie that tries to encompass comedy, fantasy, horror and action but falls into the gaps in between 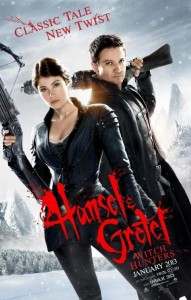 There are a lot of good ideas in HANSEL & GRETEL: WITCH HUNTERS, not the least of which was having Tommy Wirkola direct and co-write (with D.W. Harper). Wirkola’s previous film, the Norwegian-language Nazi zombie movie DEAD SNOW, displayed some of the antic spirit of Sam Raimi’s EVIL DEAD movies. The trouble is that some of the elements in HANSEL & GRETEL require a different sort of tone, and this is where things go awry.

While it’s not clear from the ads, HANSEL & GRETEL: WITCH HUNTERS takes place in a European land of yore, possibly as conceived by Mel Brooks. (When children go missing, their faces are on flyers tied to milk bottles.) The prologue shows us the fairytale we’re familiar with, albeit here the witch is an immediate monster who makes no effort to fool the youngsters.

Having succeeded in dispatching one witch, and now apparently orphaned, Hansel (Jeremy Renner) and Gretel (Gemma Arterton) grow up to be renowned witch hunters (as we see in the cleverly animated opening titles). Their preferred weapons are fire, crossbows and firearms that look like Middle Ages machine guns. The mayor (Rainer Bock) of a small Germanic town hires the siblings to look into the local witch problem, much to the anger of his sheriff (Peter Stormare). Hansel and Gretel soon find that there’s a big witch plot going on, led by grand witch Muriel (Famke Janssen).

The encounters between our dynamic duo and the energetic witches, who can use any sort of branch as a flying broomstick, are vigorous and as bloody as anything dished out by Raimi or Robert Rodriguez, with 3D gore splattering off the screen at the camera. It also turns out that Renner can carry off anything, including our simultaneously violent, naïve and self-protective hero here.

However, short of maniacal horror farce, a film – even one that lasts only 88 minutes – cannot live by splatter alone. When the fighting stops, the actors work valiantly, but nobody seems to know what the tone should be. There seems to be some effort to make the exposition and the intra-human confrontations tongue in cheek, but the writing simply doesn’t support it. Most of the dialogue scenes look like nobody had the least interest in doing them, with the result that the film falls into lulls from time to time.

The movie also doesn’t seem to know exactly how we should view Hansel and Gretel – is it meant to be funny or cool that they are so well-equipped in a pre-technological time? There aren’t any specific jokes to go with the anachronistic weapons, and it’s a little unclear how effective they are anyway. (Witches mostly seem to worry about fire in this story.) Hansel and Gretel aren’t well-defined, with the result that we can’t buy into them, and we’re given too much time to think about this and other issues to simply go with the cackling action chaos when it occurs.

HANSEL & GRETEL: WITCH HUNTERS winds up being one of those movies that sounds better in a description of its better component parts than it plays onscreen.