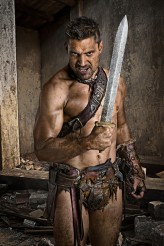 Is Crixus a victim of vengeance this season or does he have more to dole out? 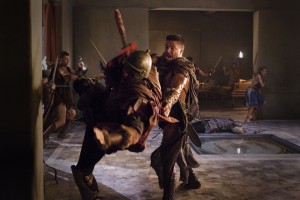 SPARTACUS VENGEANCE is cutting a bloody swath across Friday nights on STARZ, and this second season picks up shortly after the first season BLOOD AND SAND left off. Manu Bennett plays Crixus a Gaul gladiator who was once enslaved by the House of Batiatus to fight to the death for his maters’ amusement. Crixus joins Spartacus’ cause after a betrayal at the end of the last episode of the first season, and he leaves the Ludus to find his lost love Naevia.

As this season has proven, nothing is certain even though the former slaves and gladitaors have their freedom. ASSIGNMENT X got the chance to chat with Bennett for a few minutes about the new season, his character’s evolution, and what some of the changes coming down the pike this season mean for fans.

ASSIGNMENT X: After the journey of Crixus that we’ve seen in SPARTACUS BLOOD AND SAND and SPARTACUS GODS OF THE ARENA; what kind of challenges does this new season bring for your character?

MANU BENNETT: Personally as an actor I enjoy and I search for changes in a script. I search for the underbelly of a character and then how you can shapeshift. Because of circumstances always changing in the show and of course conflict rules; I’m always finding myself within the character of Crixus finding new gears.

AX: So now the slaves have destroyed their former captor’s home and are running about. Are Spartacus and Crixus really friends?

BENNETT: Now that the slaves are free of their shackles I think the big difference in the second season is the desire to firstly find direction with what their doing. Is Spartacus the leader? Is Crixus the leader? What is this band of rebel slaves, what are they doing and where are they going? It’s not like they can just hop on a plane and get out of there. They’re a long way from any border and they have the Roman’s hot on their heels. I hope fans enjoy that conflict of leadership and direction.

AX: So there’s still a lot of tension between the characters?

BENNETT: The fans might have a false sense of security about what bonds have been formed between the men. Crixus was pretty much on his way out of this world and that final battle with Spartacus, Crixus was going to finish that battle as the victor and fight to the end for that championship title. It was his drive to win that title to win his freedom and to find Naevia. That’s what he thought he had to do to make it all happen.

AX: What about adding Gannicus to the mix, who was a friend to Crixus in the end?

BENNETT: The Gannicus scenario in it’s return will come with the light of rivalry. Crixus and Gannicus’ relationship ebbed and flowed in the prequel to the point where Crixus wasn’t very happy winning the fight and not really winning the title. He felt that Gannicus didn’t really give him a fair go of it. There wasn’t any sort of huge difference between the two men. They were a lot closer than the Crixus and Spartacus scenario.

AX: What do you think of the evolution of the relationship between Spartacus and Crixus?

BENNETT: Crixus was more outwardly critical about Spartacus’ need to get out of Batiatus’ Ludus was for his wife. All the men had suffered and that didn’t seem like the kind of leadership that Crixus wanted to follow. It wasn’t until the final episode in season one that Crixus heard him talking about banding together and using this united strength to get revenge on these people, because the Romans were going to eventually destroy them. It wasn’t until Crixus realized that he was poisoned and he was going to die, and he takes the option to join Spartacus after that death lock where he asks Crixus, ‘Join me Brother.’ Then I get thrown across the arena and look up and see Lucretia smiling and laughing and then Crixus realizes that he’s the sacrificial lamb. Then I turn and tap my shield and Spartacus comes running. Crixus creates the bridge between the brotherhood and the rebellion to have the entire group of men join under Spartacus as I fostered him up onto the balcony. 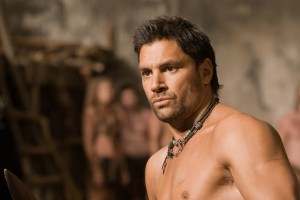 AX: So that bond formed under stress changes in season two?

BENNETT: In season two, you’ll see that moment didn’t necessarily say that they would be brothers forever. It’s not like Batman and Robin. [Laughs] It’s like Batman and the Silver Surfer.

AX: Does the Crixus and Lucretia story have a lot of twists and turns since he’s the man who tried unsuccessfully to kill her?

BENNETT: With Lucy Lawless in the second season, everyone will have been waiting for that moment to see the shock on his face that she is alive. So now moving past that point, Crixus is shocked and more aware. The new season is called VENGEANCE; so by seeing her alive and knowing about her power and connections in Rome, he knows that someone is chasing him. She knows who she wants vengeance against and Crixus is one of those top people, so the title encompasses a lot of characters for a lot of different reasons. At the same time, Crixus will have plenty of encounters of his own that will have him also wanting vengeance. So that’s where I’ll end and leave it alone. [Laughs]