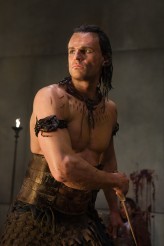 Some more rape, madness, and dastardly deeds in the big little town of Capua

“Chosen Path” is an interesting new episode of SPARTACUS VENGEANCE. There’s a lot going on in the wake of the destruction of the gladiatorial arena of Capua, and while some of it is good, a lot seems pretty bad for those involved.

Of course the subheading of this episode could be one of my favorite lines from CARNIVALE, “there ain’t no secret to dancing the cooch.” Meaning this episode is very female centric in a lot of ways and the way the women often get ahead or get what they want is through sex. Some of the cooch dancing that’s been going on this season backfires in this one, and has fatal consequences for at least one member of the group that had been developing a storyline of her own (the random slave in the rebel camp).

But before all of that let’s address the rise of Ashur (Nick Tarabay) and how he has somehow become a person of power instead of being a lackey. Not only does he prove his fighting prowess in this episode and gain the favor of Claudius Glaber (Craig Parker), he also puts himself above Lucretia (Lucy Lawless) and rapes her in the slave pens. Did we really need any more reason to want this character dead? He has to be one of the most despised villains on TV right now. Nick Tarabay and January Jones from MAD MEN should have a tea party and compare notes on all of the hate mail they must get for their work in their respective series.

Plus I was torn during the awful rape scene. You really do like Lucretia despite all of the horrible and bloodthirsty things she has done, but honestly you reach a point on this show where you figure bad things happen to virtually everyone…repeatedly. So it’s hard to feel completely sympathetic to her just because she is taking the abuse instead of handing it out. When it really comes right down to it, wasn’t she raping Crixus (Manu Bennett) for the last half of season one?

Illithyia (Viva Bianca) is totally screwed now, and not in the way she wanted to be. With the death of her father in the arena fire (with some added help to the underworld by Glaber) she is stuck with a husband she doesn’t love and child she doesn’t want. Just when you thought she and Lucretia were starting to manipulate everything to their hearts’ desires. Of course, if you start feeling too bad about her; go back and watch her smash that woman’s head into the tile in season one. Just make sure not to eat strawberry jam while watching it.

The House of Batiatus clearly inspires madness, as we now see Glaber taking the same path as the former master of the House. If someone gets in your way, kill them. Don’t waste time with politics, just take a small band of mercenaries and wipe out their entire household, except for the teenage sister that you want to bed. This can only end in tears. Again it has been easy to forget in the first part of this season with Glaber being such a pansy ass tool, what a complete bastard he used to be, so now that he’s getting back to his villainous roots its easier to cheer for his death when it happens.

Oh yeah and also in this episode Spartacus (Liam McIntyre) and Gannicus (Dustin Clare) have a duel over a misunderstanding. Yawn. It would have been better to see them act on that sexual tension that is hanging between them. Next fan slash… “Love on the Steps of Vesuvius.”