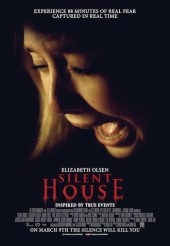 A very creepy horror film that devolves as it climaxes

SILENT HOUSE is advertised as being made in one continuous 85-minute take. If true, this is a wonderful feat of economic filmmaking, but it has strangely little bearing on the movie’s overall effect. Because the action moves from inside the title structure to outside and back again, the immediacy that the single moving take should provide dissipates somewhat. Directors Chris Kentis and Laura Lau previously directed OPEN WATER together. There, the proximity of their actors to live sharks in the same frame provided enormous tension with no need for flourishes. Perhaps the single take is meant to provide the same kind of natural intensity, but it doesn’t. While much of SILENT HOUSE is scary, there’s nothing in it that we know cannot be created by production (unlike the live sharks). At the same time, we’re caught up enough in the story and the suspense that we’re not really aware of the filming technique. The results are not appreciably different from those of a more conventionally-shot film.

In SILENT HOUSE, Sarah, her father John (Adam Trese) and his younger brother Peter (Eric Sheffer Stevens) are all packing up the family’s summer home for sale. Squatters have been here, but they are gone now – or are they? Certainly nobody has any memories of the place being haunted, but Sarah starts to first hear, then see, signs of someone else on the premises, someone who seems to be able to get from room to room in inexplicable ways.

SILENT HOUSE is based on the film LA CASA MUDA by Gustavo Hernandez. For a long while, it’s hard to understand why filmmakers Kentis and Lau – Lau also wrote the screenplay – felt the need to base their tale on anything, as what they appear to be doing for most of the movie seems in the public domain. Then SILENT HOUSE gets into its final act. To explain what goes wrong cinematically would involve spoilers, but suffice to say, at least in this version, the finale not only doesn’t work, it diminishes the effect of what precedes it.

This isn’t to say SILENT HOUSE doesn’t have strong positives. For starters, Olsen is very talented, committed and watchable, commanding the screen and keeping us engaged. The production design by Roshelle Berliner is suitably familiar and yet askew, making us unsettled by things that have made the subtle shift from mundane to menacing. There is also good use of sound and space, so that we’re afraid of what we may see and hear at any moment. For most of its running time, SILENT HOUSE is a good movie about a malevolent presence. Those who can enjoy this despite the denouement will come away feeling at least somewhat satisfied.