Armie Hammer (THE SOCIAL NETWORK) plays John Reid, the masked man, while Johnny Depp is his sidekick Tonto. Should be interesting to see how this turns out.

Check out the image below (click on it to enlarge).

THE LONE RANGER is scheduled for release May 2013 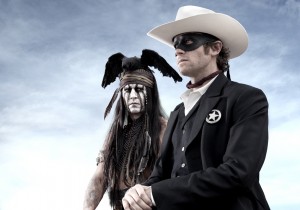