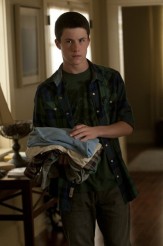 A pretty good second episode of the entertaining new series 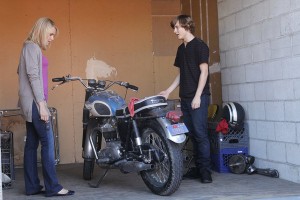 After establishing the very complex work of AWAKE where cop Michael Britten (Jason Isaacs) finds himself living in two different realities – one where a car accident claimed his wife and one where the crash claimed his son, this second episode “The Little Guy” settles into a really nice groove.

The concept could still be challenging for normal viewers, but this episode makes the conceit go down real smooth, utilizing the cop procedural element to great effect, while the B-story with his wife Hannah (Laura Allen) and son Rex (Dylan Minette) is actually quite touching and rather effective.

This week, a fertility doctor is found dead in one reality, and Michael works angles in both realities that ultimately helps finding the killer.

With his wife and son, it’s a secret motorcycle Rex was working on that links and unites the family in an unlikely way. This is a very clever way of showing how everyone deals with grief in different ways. It’s also great how information in one reality allows a better understanding in the other.

The big twist at the end of the episode involves Michael’s police captain who speaks to a mysterious figure about how the accident that claimed Michael’s wife and son in different realities was intentional. And some of the information he was investigating in trying to solve a case in both realities, has actually, inadvertently led him to a clue that all is not right (even if Michael is not aware of it at this juncture).

The other refreshing thing about this episode is how Michael is already starting to accept these two realities and not rejecting them as if he’s crazy. He’s finding a way to navigate his way thought it – using it as a second chance with not only his wife and son, but also his career.

AWAKE is a challenging show, but as “The Little Guy” proves, the concept is actually just a clever way at telling the well-worn cop genre and family drama in an engaging and wholly interesting way. With the added second mystery thrown into the mix, AWAKE is already getting me sucked in and I hope it stays that way.