Home » bones review The Archeologist in the Cocoon 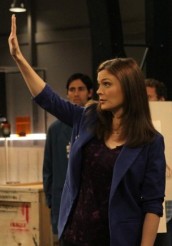 TV Review: BONES – Season 8 – “The Archaeologist in the Cocoon” 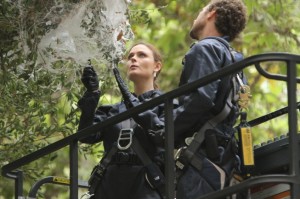 “The Archaeologist in the Cocoon,” the second half of the BONES two-hour event, finds the normally competitive Brennan (Emily Deschanel) going into overdrive when Dr. Clark Edison (Eugene Byrd), normally a lab assistant, is given the task of examining fossilized bones. The upshot of Brennan’s journey is that she realizes she needs to be a little more attuned to people around her if she’s going to set a good example for little daughter Christine. However, what makes “ Archaeologist” a strong episode is that it manages to encompass quite a few related topics and handling them all pretty deftly.

The contemporary murder victim is an archaeologist who also wrote cheesy books about his finds for a low-rent publishing company. He leaves behind a pregnant Chechen wife (Anya Manzikova), a creationist patron (Gary Grubbs) and an unhappy publisher (Amy Yasbeck). Meanwhile, it turns out that the archaeologist had found evidence of a Neanderthal/homo sapiens family that was killed by an intruder 25,000 years ago. At first, Brennan wants to take over the archaeological case, scoffing at the notion that Edison can do a better job – or even an equivalent one. However, as the find becomes more exciting, Brennan realizes that in fact Edison is good and that it’s okay for other people to get credit from time to time. At first, the ancient case seems to parallel what happened to the archaeologist – his wife’s family didn’t like her marrying an American – but the culprit is in fact the publisher, who was angry that her author wanted to do some serious writing for a change.

“ Archaeologist” has a lot of fun with the other characters realizing Brennan has the bit in her teeth and wanting to steer clear. TJ Thyne as Hodgins has a particularly good time trying to stay on the good side of everyone, especially wife Angela (Michaela Conlin). Grubbs is deft and unexpectedly charming as the ultra-religious but urbane oil tycoon and there’s a strangely bittersweet take on the fate of the little prehistoric clan. However, the parallels between the ancient family and the archaeologist and his wife don’t pull together in a meaningful way, and Booth (David Boreanaz) has a moment of complete obliviousness that’s hard to credit. (It would be one thing if he asked what ultimately happened to the prehistoric child, but him asking whether she turned out to be okay when everyone has been talking about the significance of finding the bones of a three-year-old is stretching it.)

The end of the episode has a nice beat, where Brennan expects that Booth will attempt to curb his own “failings” so as not to pass them on to Christine, while Booth wonders what she’s talking about. Since BONES is often weighted toward Brennan having to modulate her instincts for the common good, it would be nice to see Booth having to go through a little more self-examination as well. It’s also a bit odd, after an entire episode (airing immediately before this one) detailing on Angela’s need to get out of the lab more, that she’s here full time without comment.

Meanwhile, the episode has solid crime drama elements, with several likely suspects who all have plausible motives presented so that there is a bit of mystery that teases us enough to work on the procedural level.