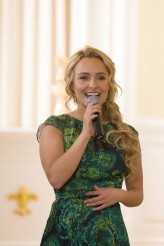 The actress talks about the similarities between her character and House 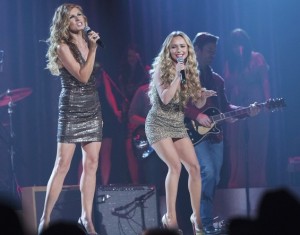 In ABC’s NASHVILLE, which airs Wednesday nights at 10 PM, up-and-coming crossover country music star Juliette Barnes, played by Hayden Panettiere, is locked into a rivalry with more traditional and established country icon Rayna Jaymes, played by Connie Britton. Both actresses were nominated for Golden Globes for their work on the Callie Khouri-created series, still in its first season.

Juliette represents something of a departure for Panettiere. Although the New York-born actress has been a thespian since her early childhood and has also cut an album as a singer/composer, she is usually known for playing kindly and selfless characters – for instance, the indestructible Claire Bennet on four seasons of HEROES. Juliette can be selfish and spiteful, but also vulnerable and high-spirited. Talking about NASHVILLE at a party thrown by ABC for the press, Panettiere sounds like she enjoys playing all of Juliette’s nuances.

HAYDEN PANETTIERE: She’s definitely rough around the edges, but there’s more to her than that, and that’s the thing that intrigued me about her and drew me to her.

AX: Is Juliet a very different character for you? You’re certainly playing all of the emotions very differently than we’ve seen you play in other characters.

PANETTIERE: Absolutely. Very different – I’ve never done this before, I’ve never gotten a chance to do this before, this is very different than playing the all-American cheerleader. And that’s exciting. It is very fun. It’s those moments that you feel like you’ve tapped into something else, that you’re really stretching your boundaries, that you’re doing something new.

AX: How did you feel about taking a role where singing is such a big part of the gig?

PANETTIERE: I recorded an album about five years ago, and I was in a period of time where I was changing all the time. I wanted to be a pop star one day, I wanted to be a rock star the other day – I didn’t know what was up, what was down, and I feel like music is really a representative of how you put yourself out there.

AX: The Rayna character is very critical of Juliette’s singing …

PANETTIERE: That affected me more than I thought. I even talked to[the producers] – “I need this to be a character that they respect to a certain degree.” I kind of think of the character of House [played by Hugh Laurie on the Fox series HOUSE]. I know it seems like a very strange, farfetched comparison, but he’s such an ass, but you respect him, because he’s so good at what he does. And even if [Juliette] is conniving and evil in some ways, I want people to respect her and I want her to be talented and be there for a reason and be a fighter and be wise enough to get what she wants. And you have to have a certain respect for that. So I wouldn’t read into that aspect too much. [Juliette and Rayna] are just very different. We’re from different times. Music is ever-changing, ever-evolving. So is your audience, which is what you have to keep up with. It is a very strange [bond] that you have to create at a certain point, to be able to evolve with your audience and grow with them.

AX: Might you be submitting any of your own music to NASHVILLE music supervisor, the legendary producer T-Bone Burnett?

PANETTIERE: There might be collaboration, but I don’t know if I’m gutsy enough to go there yet. Maybe soon.

AX: How is it playing the confrontations scenes opposite Connie Britton?

PANETTIERE: It’s tough, because I respect her so much, but I feel like the more we get to know each other, the better we are at really sinking our teeth into it, because you don’t really know where to draw the boundaries with people sometimes. But we know that we both respect each other immensely and we can really play with each other.

AX: Is there anything else we should know about your work on NASHVILLE?

PANETTIERE: My whole heart and mind and everything is in this right now.