Exclusive Interview: Sam Palladio on NASHVILLE Season 1 and beyond

The actor talks singing and speaking with an American accent, plus his upcoming movie 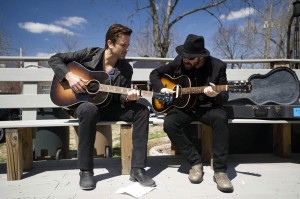 In ABC’s NASHVILLE, just renewed for a second season and currently airing Wednesdays at 10 PM, the main attraction is the rivalry between established country music superstar Rayna James (Connie Britton) and up-and-comer Juliette Barnes (Hayden Panettiere). However, there are plenty of other singer/songwriter/musicians in the story crafted by series creator Callie Khouri.

Sam Palladio plays young singer/songwriter Gunnar Scott, who makes beautiful music with girlfriend Scarlett O’Connor (Clare Bowen), but has to deal with the fact that she has acquired a manager and he hasn’t. Furthermore, Gunnar is having more success passing off music by his dead brother as his own work than he is with his own compositions, making for a crisis of conscience and ego.

Palladio does a great Southern accent, but he’s actually from Kent, England. He’s only been out of drama school for five years, but he’s packed a lot of work into that time. At a party thrown by ABC for the Television Critics Association, Palladio seems happy to talk about acting, music and everything in between as it relates to NASHVILLE.

AX: Is it difficult doing an American accent, or is that just part of Gunnar’s character for you?

SAM PALLADIO: Oh, it really is part of the character and that process, but I studied inLondon for three years, I did my acting degree and I kind of specialized a little bit in accents. I always found that to be really exciting and intriguing. [Southern playwright] Tennessee Williams is one of my favorite playwrights. I’ve done a few of his plays, so I feel like the accent and the whole Southern mentality was sort of there a little bit.

AX: I don’t know if this is universally true, but a lot of British actors say a Southern accent is easier than, say, a Californian accent.

PALLADIO: I would say it does have slightly simpler qualities to it, but then, you’ve also got to be very careful with the specifics of it. I could do a pretty good general American California accent, because we hear it on the TV all the time, because we grow up watching American TV shows. And you don’t get that many Southern-specific shows, especially in theU.K. [laughs]. So it does come relatively easy, but you’ve just got to be careful to not slip.

AX: Do the two of you help each other maintain your American accents, or do you have to avoid throwing each other off?

PALLADIO: Well, actually, on the pilot, when I first met Clare, she was being a bit Method and was very much in her accent. I knew she was fromAustralia, so I kind of picked away at her until I got her to speak in her accent [laughs]. We pick each other up, I think. Personally, I try to switch in and out when I need to, and I think during the pilot, I did try and stay in accent for awhile and try and fool some locals and see if I could get away with it, which I did, just about [laughs]. On the read-through, there were a few local actors that we hadn’t met yet officially, and of course, I didn’t have a chance to say hello before we started and I did my reading in this very broad accent, and then afterwards happened to say, “Hey, nice to meet you, I’m Sam,” and definitely caught a few people out.

AX: Did you study singing as well, or do you just come by that naturally?

PALLADIO: Never really studied it. I was brought up in a very musical house. My dad played guitar and my cousins were musicians. I was given a drum kit when I was younger. I always played in bands and that was my upbringing, playing in bands and doing drama and music. So no formal training, but I think I’ve got an ear for it. [At college], they did this actor/musician degree, so I trained as an actor, but actually, everybody on the course played instruments, so it was very much about putting music into theatre. The degree I did was very much a straight acting degree, but it meant that actually, because I sing and because I have music skills, when it came to getting your first jobs, there was a resurgence of actor/musician musicals, so I did a couple of musicals that were about bands. I did a musical called DREAMBOATS AND PETTICOATS that’s a Fifties rock ‘n’ roll show, and they use live musicians who play a band. That was my way in, I guess. I graduated 2008 and went into a couple of musicals and then moved to some more TV and film work. I did the second season of EPISODES for Showtime [in 2011], and that kind of opened the American doors.

AX: Which instruments do you play?

AX: Did you have any ideas about the country music industry before you got into NASHVILLE, and if so, does the show conform to what you thought it was like?

PALLADIO: Actually, you know what? It’s blown me away, the diversity of country music. The songs that I write and the music I listen to are very kind of Seventies folk, Neil Young, Crosby, Stills and Nash, that kind of thing – country music surprised me in terms of, it’s so varied and it’s not just one archetype.

AX: NASHVILLE as a series depicts of the business around the music. Do you find it to be a realistic portrayal?

PALLADIO: I think it’s kind of true to life. The music business out there is big and bustling and a bit cutthroat, so I think we manage to depict that pretty accurately. It’s a bit like theL.A. [film and television] business in terms of that struggle to achieve and be successful.

AX: NASHVILLE actually shoots in Nashville. Some of the pilot was actually filmed in the famous singer/songwriter hangout there, the Bluebird Café. Have you gotten to go to any other historical Nashville musical sites?

PALLADIO: It really is. Once we finished the pilot, Steve Buchanan, who’s one of our producers, he actually runs the Ryman [a famous performing venue] and the Grand Ole Opry, so we have the sort of fast track, to any gig, any performance that happens there. So he took us to the Ryman and we got to stand on the stage and do our thing, and we got to do a cast and crew guitar pool one night on the Ryman stage, so I’m very lucky to say I’ve sung at the Ryman.

PALLADIO: [laughs] I would love that. It’s certainly a possibility. I think the great thing is that Callie Khouri, who helms our writing, is such an interesting writer and none of these characters are black and white and the door is open for possibility.

PALLADIO: Well, I’ve wrapped on my first feature film, called RUNNER, RUNNER, which is a show with Ben Affleck and Justin Timberlake, in Puerto Rico, of all places. So that will be coming out sometime [in the] summer. That was a fantastic experience, to be fast-tracked into a big-budget American movie. I’m playing an Englishman this time, actually, which is a nice change. I seem to have played Americans for awhile, so I play a character called Shecky. The movie’s all about online gambling. Ben Affleck plays the kingpin of this shady offshore gambling franchise, and Timberlake’s enlisted to become part of that. And they want my character, who’s an Englishman with some fantastic connections, to be part of that.

AX: Does being in a show like NASHVILLE that is so much about career ambition cause you to re-evaluate your own professional ambition in any way?

PALLADIO: To be honest, I think it’s quite good casting, because I feel that my take on it all is very much a Gunnar take on it. I feel very lucky to be here and very privileged to be working with an incredible cast. Like my character, I’m ambitious, but I think you’ve got to be able to take a step back and appreciate where you’re from and remain grounded. I’ve got a great family back home that will certainly slap me down if I become too big-headed and ambitious about the whole thing [laughs].