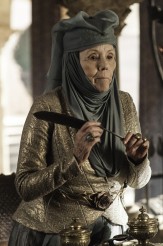 A properly epic scaling of the Wall

The visual scope of GAME OF THRONES can be viscerally thrilling, and so it is with “The Climb.” Jon Snow (Kit Harington), his lover Ygritte (Rose Leslie) and the wildling war party scale the Wall, which is made to look as vast and formidable and frigid as its reputation has suggested. When Jon and Ygritte almost fall to their deaths, it is effectively suspenseful, and when at last they arrive at the top, even though we know their presence is about to create havoc, it is a moment of triumphant wonder.

Other high points of the episode include a negotiation between Tywin Lannister (Charles Dance) and Lady Olenna (Diana Rigg) about whether Olenna’s grandson Loras will wed Tywin’s daughter Cersei (Lena Headey). Loras is gay and Cersei doesn’t want to marry anyone. More to the point, Olenna doesn’t want to marry off her beloved grandson to a woman almost past childbearing age who is said to have committed incest with her brother Jaime (Nikolaj Coster-Waldau). Tywin points out that if Olenna cites the incest rumors as a reason for withholding consent, there’s no reason for her to have her granddaughter Margaery (Natalie Dormer) wed Tywin’s grandson King Joffrey (Jack Gleeson), because this would mean Joffrey isn’t really Robert Baratheon’s son after all and therefore has no right to the throne. Olenna appreciates the way Tywin negotiates and Rigg and Dance together are splendid.

Cersei and her younger brother Tyrion (Peter Dinklage) are both horrified by their respective upcoming marriages. Tyrion is now betrothed to young Sansa Stark (Sophie Turner) and must break the news to her – in front of her lady’s maid Shae (Sibel Kekilli), who (unbeknownst to Sansa) is also Tyrion’s lover. Tyrion and Cersei speculate that if Jaime returns in time, he may stop Cersei’s wedding, probably by killing Loras, but Tyrion is stuck no matter what happens.

Tyrion also asks if Cersei is the one who sent an assassin to kill him during the Battleof the Blackwater. When Cersei doesn’t reply, Tyrion says it was either Cersei or Joffrey, who hates Tyrion because as hand of the King (though Tywin has now taken over that position), Tyrion was telling Joffrey what to do. It’s a fascinating scene and we’re not entirely certain what to think. Dinklage and Headey exude a sense of genuine affinity for one another in these scenes that make us believe Cersei probably wouldn’t try to have Tyrion killed, but as GAME is full of feints and misdirects, the truth remains to be seen.

Roose Bolton at last agrees to set Jaime free and let him return to King’s Landing – but insists on keeping Brienne (Gwendoline Christie).

In another part of the forest, Arya (Maisie Williams) is horrified when she and the Brotherhood Without Banners meet Melisandre (Carice Van Houten), who is here to buy Arya’s friend Gendry (Joe Dempsie). Melisandre knows that Gendry is King Robert’s bastard and we suspect (though most of the characters don’t know) that she intends to sacrifice him to advance Robert’s cause. Arya is incensed that the Brotherhood would sell Gendry – but she gets the mild satisfaction of alarming Melisandre, who says she sees in Arya’s face the eyes of the many people Arya will kill.

It turns out that Baelish (Aiden Gillen) has bested Varys (Conleth Hill) in this particular round of the game. Baelish has identified Varys’ informant – Baelish’s prostitute Ros (Esme Bianco) and sold her to an undisclosed buyer who wants some sort of new experience with her. We see that the buyer is King Joffrey, who has stripped Ros naked and killed her by shooting her full of crossbows.

This last has the effect of reminding us, should we have thought Margaery might be having a heartening effect on him, that Joffrey is a sadistic psycho. The expression of deep thought on Gleeson’s face is far more powerful than a maniacal leer would be.

The episode is full of great pairings – Dance/Rigg, Dinklage/Headey, Williams/Van Houten, Gillen/Hill. These scenes crackle with tension, wit and above all conviction. We believe all of these people and all of their goals. It’s spellbinding.

Again, the spectacle of the Wall and its ascent by Jon and the wildlings is theatrical in the best sense – it seems as though it would look great in IMAX.

On the other end are scenes with Bran (Isaac Hempstead-Wright) and his traveling companions heading toward the Wall, and Theon (Alfie Allen) being tortured in the dungeon. We know that Bran has visions, as does Jojen Reed – it’s not a bad sequence, but since it doesn’t advance character or add information, it seems a bit lacking compared to the surrounding segments. Theon being tortured has the same stagnant quality, with the added element of being somewhat squeamish-making without helping us feel something different about Theon. We don’t learn anything new here either, even about Theon’s character – he begged, he repented and was tortured some more in the previous episode. He’s being tortured by a fibbing psychopath who isn’t Joffrey – we’ve got it.

This aside, “The Climb” is a powerful episode.