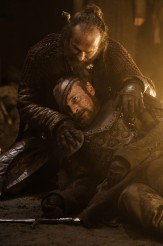 A few great scenes, but a slower than usual feel 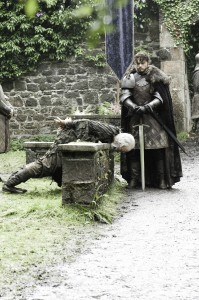 Even a less-than-top notch episode of GAME OF THRONES tends to outshine much of the best of other series, and so it is with “Kissed by Fire.” There are some wonderful moments, but despite a big (literally) flaming swordfight, this is an episode with many set-ups and few payoffs.

Beyond the Wall, Wildling Ygritte (Rose Leslie) finally gets Jon Snow (Kit Harington) to lose his virginity with her – after all, Jon can hardly say he’s secretly still a Man of the Night’s Watch and keeping his chastity vows. Besides, Jon turns out to be pretty enthusiastic about breaking this particular vow.

Sandor Clegane (Rory McCann) faces trial by combat with Brotherhood Without Banners leader Beric Dondarrion (Richard Dormer). Sandor “proves” his innocence by slaying Beric. Beric is then brought back from the dead by his priest Thoros (Paul Kaye), who worships the same god as Melisandre but seems a good deal more humane about it. This is Beric’s sixth resurrection, and he’s not enjoying them. Arya (Maisie Williams), however, wishes Thoros could bring her father back to life. She also has to be physically restrained from attacking Sandor, who leaves. Arya’s friend Gendry (Joe Dempsie) decides to remain with the Brotherhood to give him a sense of family he’s not known before. Arya says she could be Gendry’s family; Gendry says Arya would be his lady. Arya seems shocked.

When Lord Stannis (Stephen Dillane) tries to confess to his wife Selyse (Tara Fitzgerald) that he’s been with Melisandre, it turns out Selyse knows and thinks this is wonderful – perhaps Melisandre can give Stannis a live son, unlike the stillbirths Selyse keeps in her room in large jars. Selyse also keeps her daughter with Stannis, young Shireen (Kerry Ingram), locked away, evidently due to the child being afflicted with disfiguring grayscale disease. Shireen is sweet and happy nonetheless, glad to see her father. She also goes to see the imprisoned Ser Davos (Liam Cunningham) and vows to teach him to read.

Jaime (Nicolaj Coster-Waldau) and Brienne (Gwendoline Christie) are saved from the sadistic Locke (Noah Taylor) by his master Lord Bolton (Michael McElhatton), who has Jaime’s handless arm treated. Jaime insists on joining Brienne while bathing, though distance is kept. Jaime finally tells Brienne exactly how he became the Kingslayer. Jaime knew his father Lord Tywin (Charles Dance) was going to betray the Targaryen king and warned the king to surrender. Instead, the king planned to set fire to the entire city ofKing’s Landing via pyromancy, hoping to kill everyone else, burn himself and resurrect as a dragon. Jaime killed the pyromancer and slit the king’s throat to prevent mass murder and the possibility that the mad king might actually become a dragon. Brienne is stunned. Jaime then faints in her arms.

One of Robb Stark’s (Richard Madden) chief bannermen, Lord Rickard Karstark (John Stahl), kills two young Lannister squires who are being held for ransom in revenge for Jaime having killed one of Karstark’s sons. Robb is so incensed by this that he executes Karstark, even though this means he loses half his army (those loyal to Karstark). Robb now feels he must turn for assistance to Walder Frey, whose daughter Robb was supposed to marry; Robb married for love instead.

The Unsullied have elected a captain from among their ranks. The man is called Grey Worm (Jacob Anderson). Daenerys tells the Unsullied they are free to choose new names, but Grey Worm feels this is a lucky name, since it’s the one he had when Daenerys freed him. Meanwhile, Daenerys’ advisors, Jorah Mormont (Iain Glen) and Ser Barristan (Ian McElhinney) show mistrust of one another.

In King’s Landing, Tyrion (Peter Dinklage) has a brief meeting with Lady Olenna (Diana Rigg), getting her to agree to pay for half of the upcoming royal wedding.

Lord Baelish (Aiden Gillen) finds that Sansa (Sophie Turner) no longer wants to leave with him. Thanks to his spies, Baelish knows that Sansa expects to marry Loras Tyrell (Finn Jones), brother of queen-to-be Margaery (Natalie Dormer). Loras is also gay, which is fine with Margaery and unknown to Sansa. Tywin Lannister summons son Tyrion and daughter Cersei (Lena Headey). As Sansa looks likely to inherit Winterfell and with it the North, Tywin is not about to have the Tyrells take her. He insists that the shocked Tyrion marry Sansa. Tywin then demands that Cersei marry Loras. Cersei refuses; Tywin commands that she comply.

Lannister family get-togethers are always fun for the audience, though generally not for the Lannisters, and this one induces proper jaw-dropping. Tyrion and Sansa? The dialogue is splendid. When Tyrion argues that Sansa surely won’t want to marry him, seeing that she has already had the misery of being abused by Joffrey, Tywin retorts, “Are you planning to mistreat her?” As appalling as Cersei can be, Headey gives her such visceral grief and dismay in this scene that we can’t help but feel for her.

The scene in which Jaime relates how he came to be the Kingslayer is mesmerizing, beautifully acted by both Coster-Waldau and Christie, and Daenerys interacting with her clearly loyal troops is thrilling.

However, a lot of the episode seems to be advancing in bits and pieces. Leslie is extremely appealing as Ygritte, but there isn’t as much sense of relief and release from Harington as Jon as we might expect. Williams is excellent as usual, but we’ve known Dondarrion so briefly that his resurrection seems more peculiar than shocking. As for Robb, he’s making such a bone-headed decision (against the advice of his wife, mother and advisors) by killing Karstark that we’re more exasperated with him than apprehensive for him at present, though this may change.

“Kissed by Fire” is good television; it just isn’t as compelling in its entirety as much of the rest of GAME OF THRONES.