Immersive and engaging, though with less physical action than usual 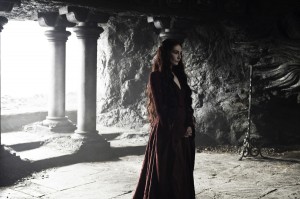 The episode “Dark Wings, Dark Words” takes its title from the GAME OF THRONES-verse saying, which translates to messages, brought by dark-winged ravens, are usually bad news. In fact, a lot of characters find themselves in plenty of trouble without forewarning, though Lady Catelyn (Michelle Fairley) gets a double dose of dark words – her lord father has died at the Tully homestead of Riverrun and her marital home of Winterfell has been sacked and burned, with her two youngest sons nowhere to be found.

Actually, Lady Catelyn’s youngest children, physically crippled by psychically acute Bran (Isaac Hempstead-Wright) and little brother Rickon are fine, though on the run with wildling servant Osha (Natalia Tena) and large serving man Hodor (Kristian Nairn). They are joined by Jojen (Thomas Sangster) and Meera (Ellie Kendrick) Reed, a brother and sister who seem to be Bran’s age. Meera protects her brother, a seer who has seen Bran in a dream the two boys both had. Jojen says it was very important that he and Meera find Bran.

Ramsay Snow (Iwan Rheon), who has taken Winterfell from the treacherous Theon Greyjoy (Alfie Allen), is now torturing Theon to find out why Theon took Winterfell in the first place. Theon begs for mercy.

King Beyond the Wall Mance Rayder (Ciaran Hinds) confers with Jon Snow (Kit Harington), explaining that he’s managed to get all the warring beyond-the-wall tribes together by telling them truthfully they’ll all die if they don’t get south.

As what’s left of the Night’s Watch heads back to the wall, Sam (John Bradley) almost gives up in the snow, but he’s saved by his friends and Commander Mormont (James Cosmo), who orders Sam not to die.

Arya Stark (Maisie Williams) and her friends Gendry (Joe Dempsie) and Hot Pie (Ben Hawkey) are stopped for questioning by a group of soldiers/outlaws who say they’re out to save Westeros. Unfortunately, just before Arya andCo.are to be released, the soldiers capture Sandor Clegane (Rory McCann), aka “the Hound,” a ferocious runaway servant of the Lannisters who recognizes Arya as one of Ned Stark’s daughters.

As warlike Lady Brienne (Gwendoline Christie) tries to lead her captive Jaime Lannister (Nicolaj Coster-Waldau) back to King’s Landing, he tries to get her goat with banter, though he can’t help but admire her fighting style and sympathizes with her obvious love for the late Renly Baratheon – not that Jaime shares Brienne’s fondness for the man, but he knows all about loving the wrong person. When Jaime gets loose, he and Brienne fight – but then they are captured byBolton’s men.

In King’s Landing, Tyrion (Peter Dinklage) is both pleased and exasperated when his mistress Shae (Sibelle Kekilli) turns up in his quarters – if Tyrion’s father finds out, Shae will be killed. Shae is worried for Sansa Stark (Sophie Turner), but worry turns to slight jealousy when Tyrion mentions that Sansa is beautiful.

Sansa, relieved to have been cast aside as a prospective bride for King Joffrey (Jack Gleeson), is invited to lunch with Joffrey’s new bride-to-be Margaery (Natalie Dormer) and her grandmother, the Lady Olenna (Diana Rigg). Lady Olenna, a very sharp woman, wants to know what sort of man Margaery will be marrying. Sansa doesn’t want to say, but after many reassurances, she acknowledges that Joffrey is a monster. This won’t stop the wedding. Alone with Joffrey, Margaery wins some favor with him by explaining that, even though she’s a widow, she’s still a virgin, as her husband Renly didn’t want to have marital relations. Further, Margaery expresses interest in hunting – Joffrey would love to see her kill something.

All of the cast members, both THRONES veterans and newcomers, are aces. It’s wonderful of course to see Diana Rigg in pretty much anything, and here she is as tart, forceful and regal as any royal matriarch could be. Gleeson comes up with an answer to the question of what could be more creepy than Joffrey being openly sadistic, which turns out to be Joffrey being seductive. It’s a terrific portrayal of an awful human being.

Christie and Coster-Waldau are a great double act, winning us over as they bait each other. And Dinklage as Tyrion is, as always, magnetic.

Williams is appealing in her defiance as Arya, and we feel genuine suspense as to what will happen to her and her companions. The Bran scenes are a little slow, mainly because we (like Bran) can’t see where they’re going so far.

The scenes beyond the Wall also feel more like stepping stones than destinations in themselves in this episode, though the scenery is stunning. Even more than the extraordinarily rich production design, the outdoor vistas, seas of green and oceans of ice, make us feel as though we’re watching a feature film.

“Dark Wings, Dark Words” doesn’t have the kind of smashing set pieces that make some GAME OF THRONES episodes unforgettable, but it is still a solid part of the series, which means it’s better than most other television altogether.