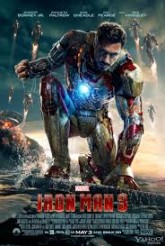 When you think about it, Marvel has done something, no other company has been able to successfully do. They’ve taken all of their comic book properties not licensed to other studios, and created a successful feature film franchise encompassing several different characters and movies that all tie into a core mythology.

Throughout THE INCREDIBLE HULK, IRON MAN, CAPTAIN AMERICA: THE FIRST AVENGER and THOR, audiences have glimpsed completely different heroes doing widely different things, yet they all came together for last year’s huge team-up movie THE AVENGERS with fantastic results.

And the hits are going to keep on coming, with sequels to many of the above mentioned films, a GUARDIANS OF THE GALAXY adaptation and likely more spin-offs in the years to come.

The excitement level is so high, it could have potentially ruined IRON MAN 3 which is following close on the heels of last year’s THE AVENGERS. Thankfully, that’s not the case. Even though Jon Favreau isn’t returning to direct (he helmed the first two IRON MAN films but he does reprise his role as Stark’s right hand bodyguard man), Shane Black (of LETHAL WEAPON fame) helms and co-writes (with Drew Pearce) bringing something fresh to the franchise (and to the Marvel universe).

The film picks up where THE AVENGERS  left off, with Tony Stark aka Iron Man (Robert Downey Jr.) dealing with post-traumatic shock after saving the world from aliens. He has anxiety and he’s just not right in the head, making it hard for him to focus on everyday things like his girlfriend Pepper Potts (Gwyneth Paltrow).

Enter a new villain – the Mandarin (Ben Kingsley). His country of origin is ambiguous, but his threats are very real. He’s a terrorist and hell-bent on causing chaos and destruction around the globe. When Stark challenges the Mandarin to come after him, everything Stark knows and love is threatened.

It’s back to basics for him, in some ways, as he has to find a way to save the world, his girl and even himself.

Also adding conflict is Aldrich Killian (Guy Pearce), a nerdy scientist Stark once shunned, but now has state-of-the-art technology that he’s trying to get Stark to buy into – and courting Pepper to help him.

The fun value of the movie is also beefed up due to Stark’s best friend James Rhodes (Don Cheadle). In IRON MAN 2, Rhodes suited up as the government’s version of Iron Man dubbed War Machine. Now, there’s a 2.0 version and it has the kinder, gentler name of Iron Patriot.

The film makes a successful attempt to create a LETHAL WEAPON-esque buddy film scenario with Stark and Rhodes, battling bad guys outside of the suits and making the last half of the movie feel like a LETHAL WEAPON movie (no surprise with Black’s list of credits). Yet it works, and grounds the film in ways the previous two IRON MAN films couldn’t because it had so many major spectacle moments.

Granted, IRON MAN 3 has its spectacle too – and it’s amped up to a very impressive degree. The movie also continues the evolution of the various Iron Man suits Stark wares and continues to add more gadgets and toys to them.

While IRON MAN 3 scales back on introducing any new Marvel heroes into the mix like IRON MAN 2, that’s okay, because it would likely interfere with the anticipation of THE AVENGERS 2. Besides, after the large-ness of THE AVENGERS, there’s something about making IRON MAN 3’s more personal storyline to bring the Marvel universe back to earth for awhile.

As always, Downey Jr. is fantastic as Stark. It’s a role tailor made for him and he’s really become the true anchor and leader of the Marvel Universe properties in this current Marvel-controlled film enterprise. It’s really impossible to see anyone else playing Stark, and Marvel would be fools to get rid of him at this stage. He’s worth every penny they pay him to keep him around as long as he wants to walk in Stark’s shoes.

While THE AVENGERS was definitely family friendly, be cautioned that IRON MAN 3 is a little darker and far more violent than you might expect (though it’s in line with the violence level of the previous two installments). The movie also has a great twist mid-way through that might confuse some younger viewers, but for older audiences, it’s something that works rather well and brings an even bigger dose of satiric comedy into the IRON MAN world.

While most franchises fail when it comes time for their third installments (SUPERMAN III, SPIDER-MAN 3, ALIEN3 … and the list goes on and on), IRON MAN 3 bucks that unfortunate trend. It’s an exciting superhero movie delivering everything you would expect, and without the fat. It  also provides a reprieve of the random messiness of IRON MAN 2 (I still liked that movie though, unlike many fans) and yes, it’s a perfect follow-up to THE AVENGERS.