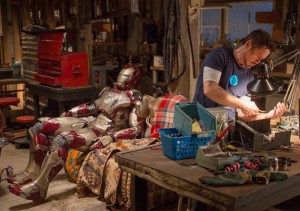 If last year’s THE AVENGERS was any indication, Marvel Studios knows how to manage its stable of comic book characters in film and how to maximize storylines, characters and talent over the course of multiple movies.

Although this could be viewed as a direct sequel to THE AVENGERS (Stark has post-traumatic stress from saving the world from invading aliens), the latest film directed by Shane Black (taking over from Jon Favreau) grounds the film in reality. The terror is homegrown in the form of terrorist The Mandarin (Ben Kingsley) who has no particular country affiliation. The Mandarin attacks global targets and uses the media to get his message across. When Tony Stark demands The Mandarin come after him, it becomes personal as Stark has to get back to basics to find his humanity again.

On the biggest challenge of IRON MAN 3 …
“These movies are only as good as their bad guys,” says Downey. “And once we cast Ben, only half of the problems went away and then it was executing this peculiar arc.”

On Stark befriending young kid Harley Keener (Ty Simkins) in the film …
“It’s a Capra-esque departure,” says Downey Jr. “In IRON MAN 3, we were taking risks and were out of familiar territory. [Shane’s] idea was a superhero running into a little ekid in the heartland of America and it wound up being a wise choice and a calculated risk.”

On Tony dealing with the fall-out of THE AVENGERS …
“It doesn’t reference that movie,” says Downey Jr. “We were so busy trying to make out thing work, we didn’t have space. It would have been a lack of confidence it we didn’t. The idea that this kid was getting under my skin [about saving the world in THE AVENGERS] and a kid bringing him to the verge of an anxiety attack, I thought that was a nice way to refer back to it. You plug things in like an operator. That fits in nice here.”

WHAT DID YOU THINK OF IRON MAN 3 – COMMENT BELOW