Breaking News: Neil Gaiman chats DOCTOR WHO and the return of the Cyberman

The Cyberman return again in his new episode NIGHTMARE IN SILVER 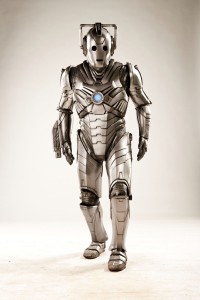 This Saturday May 11 on BBCAmerica, the Cyberman return on DOCTOR WHO for an episode entitled “Nightmare in Silver” written by author and sometime WHO scribe Neil Gaiman.

Gaiman spoke to the press today about his latest gig and revealed some cool things about his forthcoming episode.

The big mandate, according to Gaiman, was making the Cyberman scary again.

“[Executive Producer Stephen Moffat] said if I could find the time, he would love it if I could make the Cyberman scary again,” says Gaiman. “When I was a kid, I was a huge Patrick Troughton fan and he was my Doctor. I remember ‘The Moonbase,’ the second outing of the Cyberman. I was terrified of them. I was much more scared of them than the Daleks. They were quiet and slipped in and out of rooms and were oft-putting. I loved the design of the clanky, clanky steampunk Cyberman. So I knew their time was coming up and wouldn’t it be fun if I could make them more scary.”

While previous incarnations of the Cyberman were slow, the new incarnation have made them fast and Gaiman says it’s all due to technology upgrades.

“My phone doesn’t look like what it did five years ago, let alone ten years ago,” says Gaiman. “My computer looks nothing like 15 years ago. They talk about upgrading, so what would an upgraded Cyberman look like? It would move pretty fast and if you found one on your planet, it’s going to be very hard to destroy and incredibly dangerous.”

If Gaiman ever gets the chance to revisit the Cyberman, he says he still has more he’d like to do with them.

“If I ever get back to another, I would probably do much more of what it’s like to deal with a Cyberman and why you blow them up,” says Gaiman. “We only had 42 minutes and there’s huge chunks of what I wrote that didn’t get shot and didn’t make it onto the screen. We had so much we had to do and so little time.”

And now that Gaiman has tackled the Daleks and the Cyberman, is there anything else he would like to revisit in the WHO universe?

“I would love to create a monster and have it be one that is interesting enough or fun enough to be written by someone else or turn up reinvented,” says Gaiman. “I like the feeling you’ve left something behind. I also miss the Yetis. The trouble with everything these days is time. There are ridiculous amounts of demand of my time and so many thigns I’m trying to do. I think they like me at DOCTOR WHO, I like them too, and I think they’ll have me back.”